Some treat problem-finding like it’s a sport to win. But finding & highlighting problems is easy. Complaining is easy. Mocking & belittling people and/or their efforts is easy.

What isn’t as easy? Being solution-oriented instead of problem-focused & leading by example — & with love. 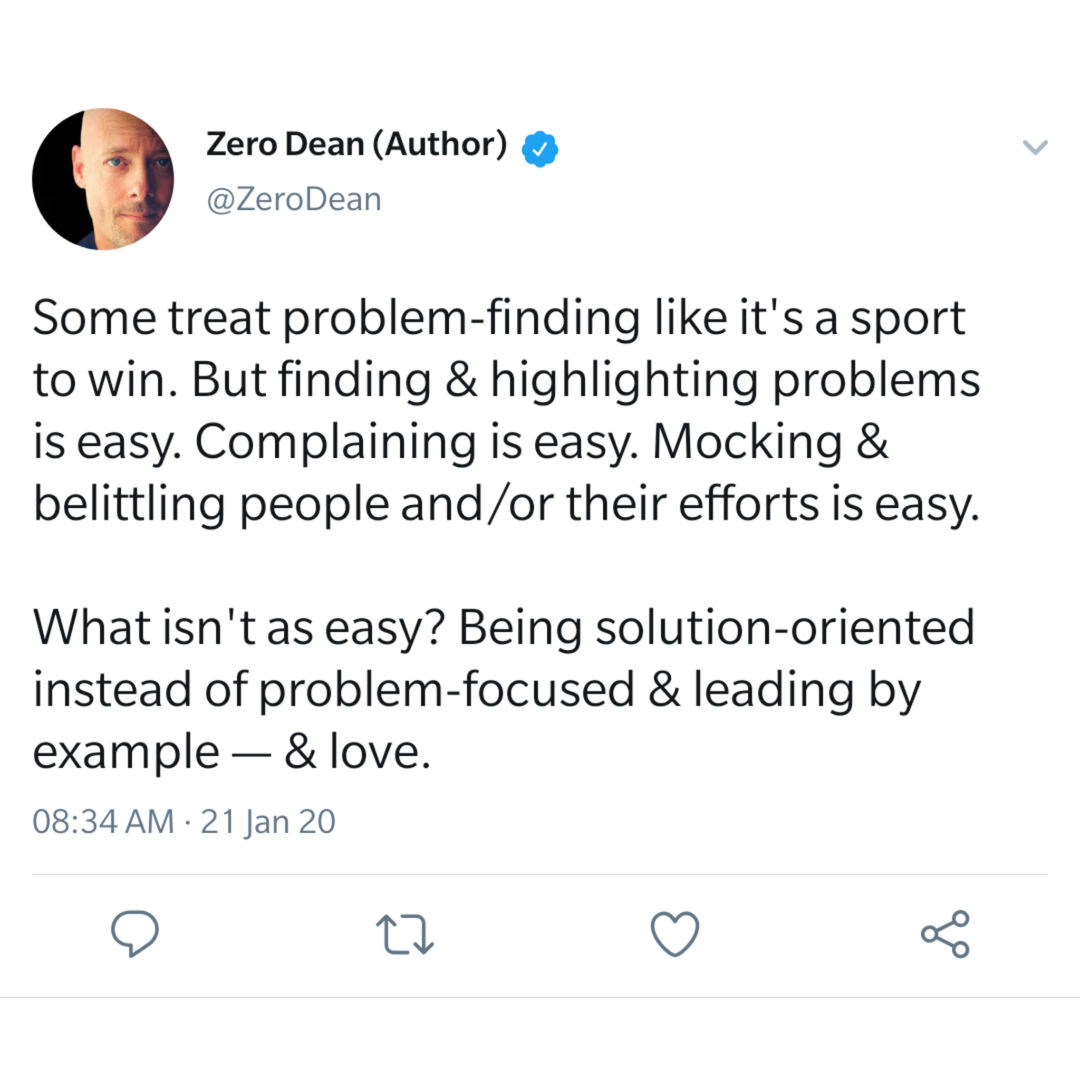 A difference of opinion doesn’t mean someone is against you & it doesn’t mean you can’t be friends — or at least get along.

A respectful disagreement is far more interesting & leads to far more growth than only associating with those who see things exactly as you. 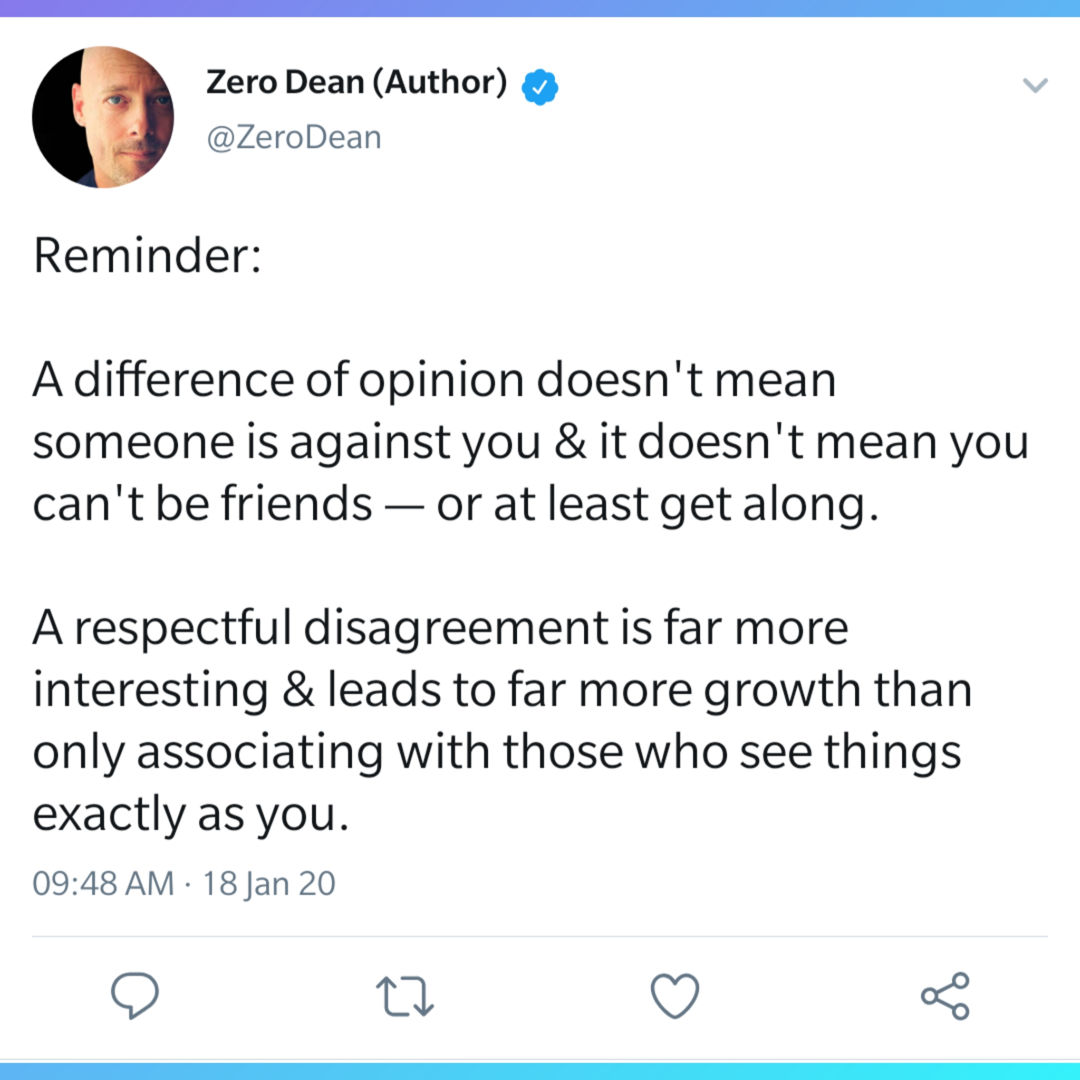 Be very careful giving & very careful considering advice that uses absolutes like always, never, biggest, worst, or best because it’s often not true. It can also show arrogance or naivety in its assumption.

It’s foolish to think that one thing applies to over 7.5 billion people. 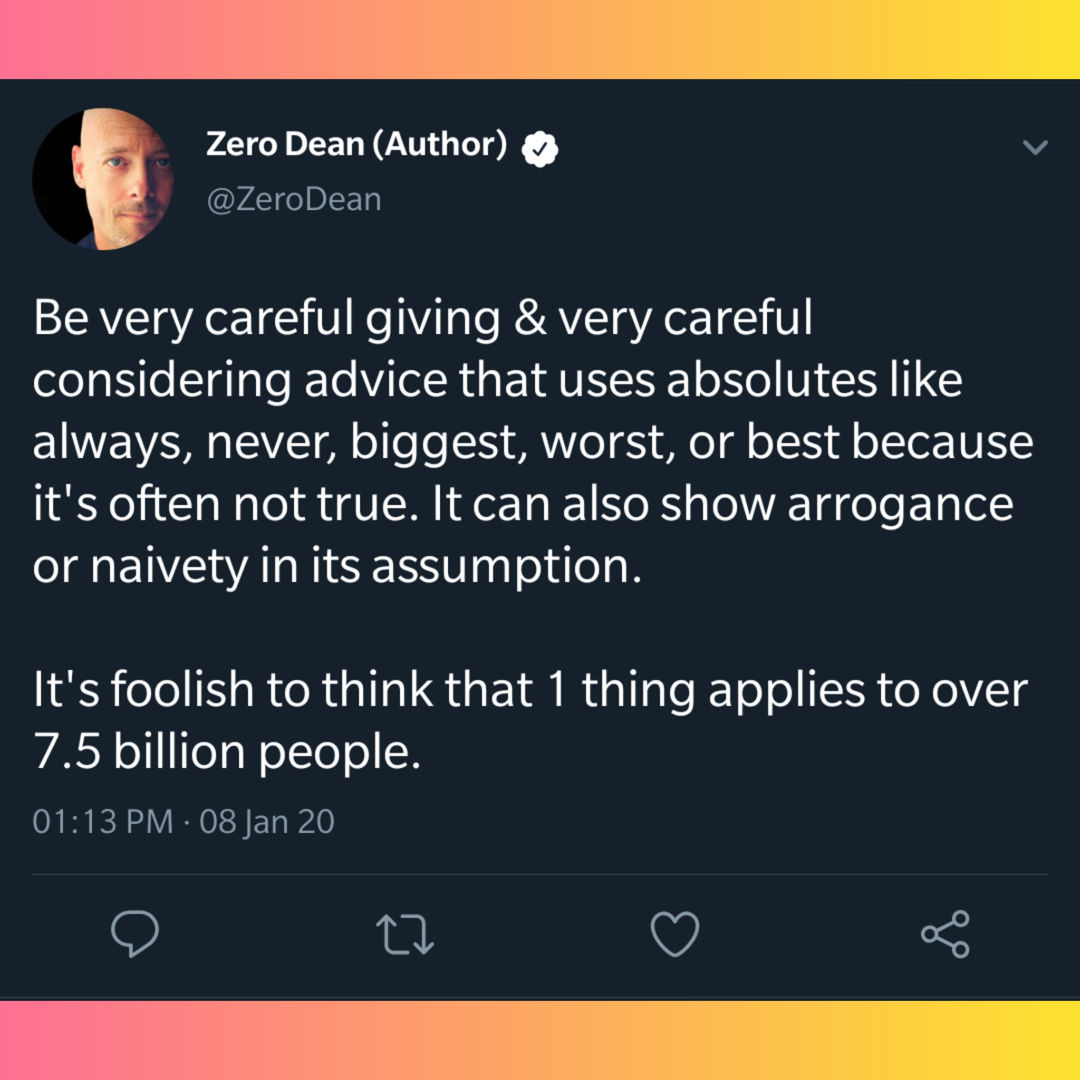 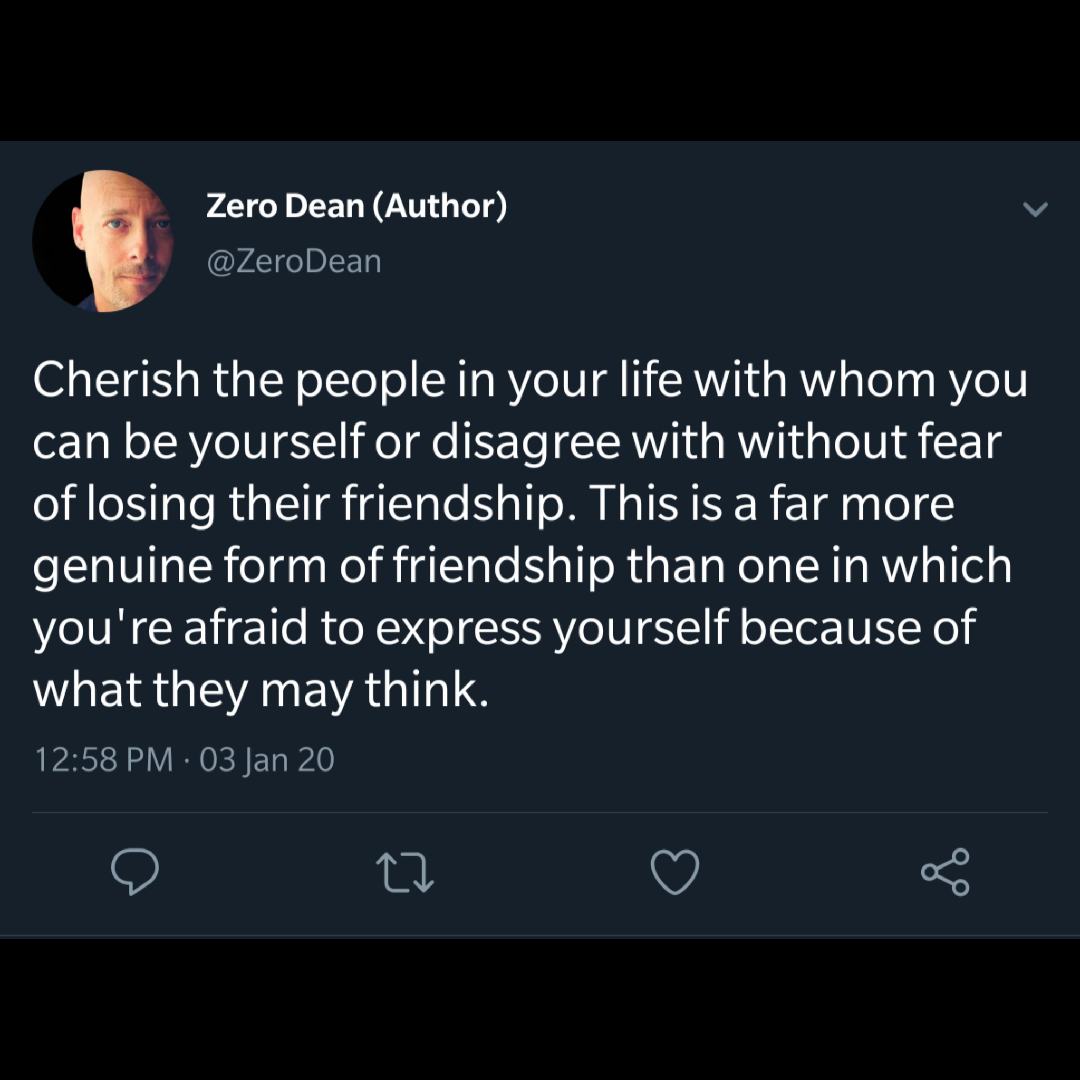 You’re better off with friends with whom you don’t agree with on everything than you are with friends you do.

One encourages you to see the value in other people’s perspectives while the other tends to paint the world in a way that doesn’t reflect reality.

Cherish the people in your life with whom you can be yourself or disagree with without fear of losing their friendship. This is a far more genuine form of friendship than one in which you’re afraid to express yourself because of what they may think. 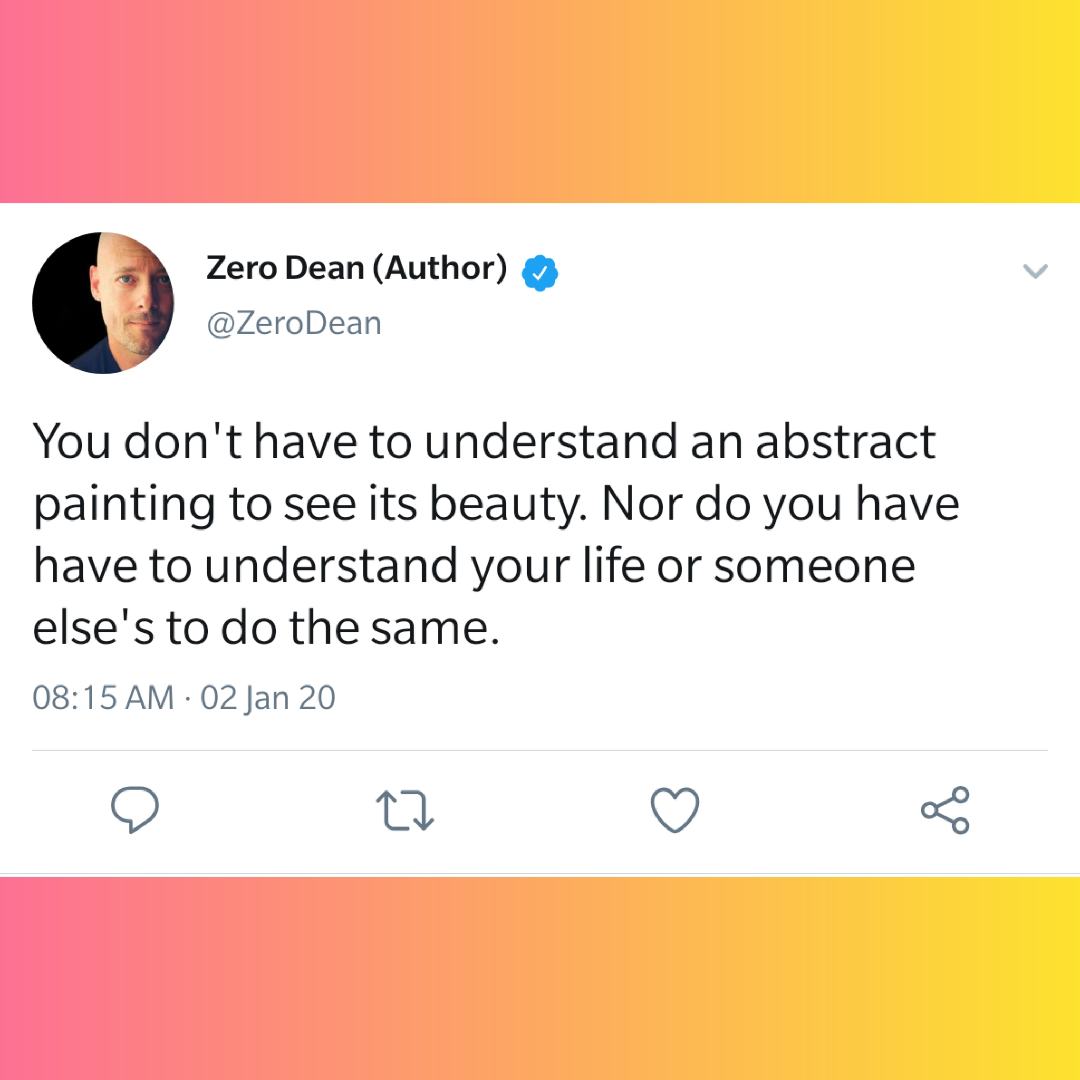 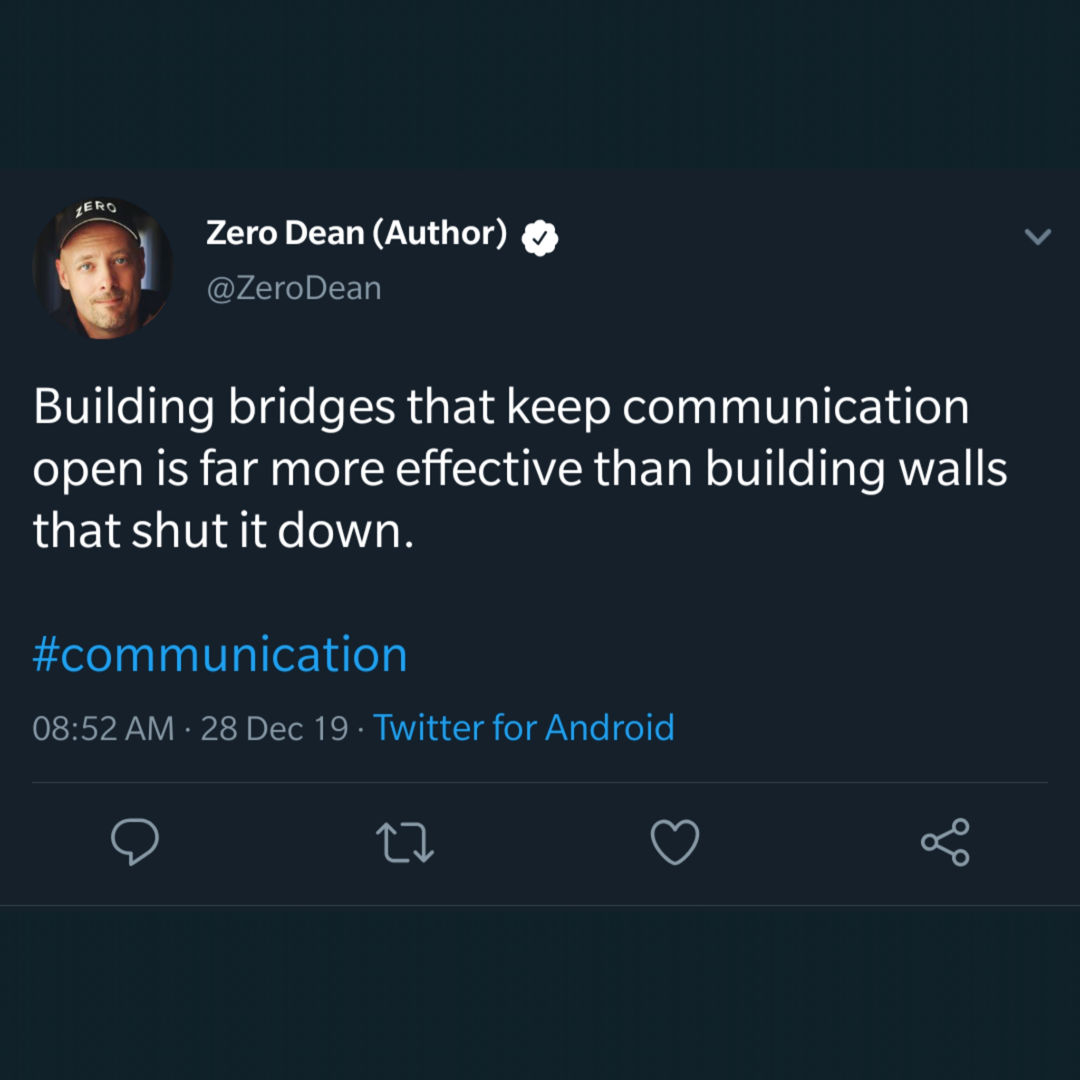 Building bridges that keep communication open is far more effective than building walls that shut it down. 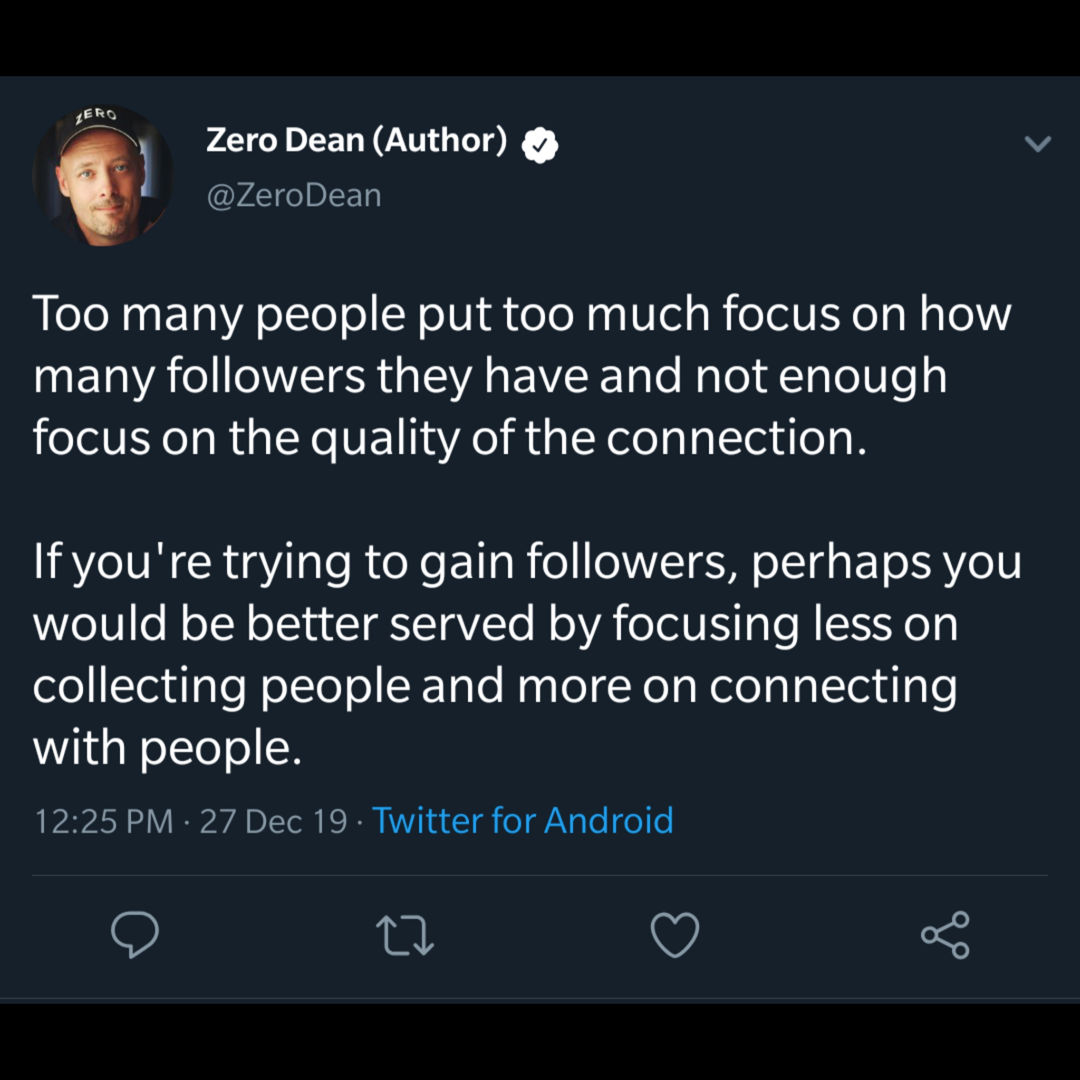 Too many people put too much focus on how many followers they have and not enough focus on the quality of the connection.

If you’re trying to gain followers, perhaps you would be better served by focusing less on collecting people and more on connecting with people.

*This applies to “friends” as well. 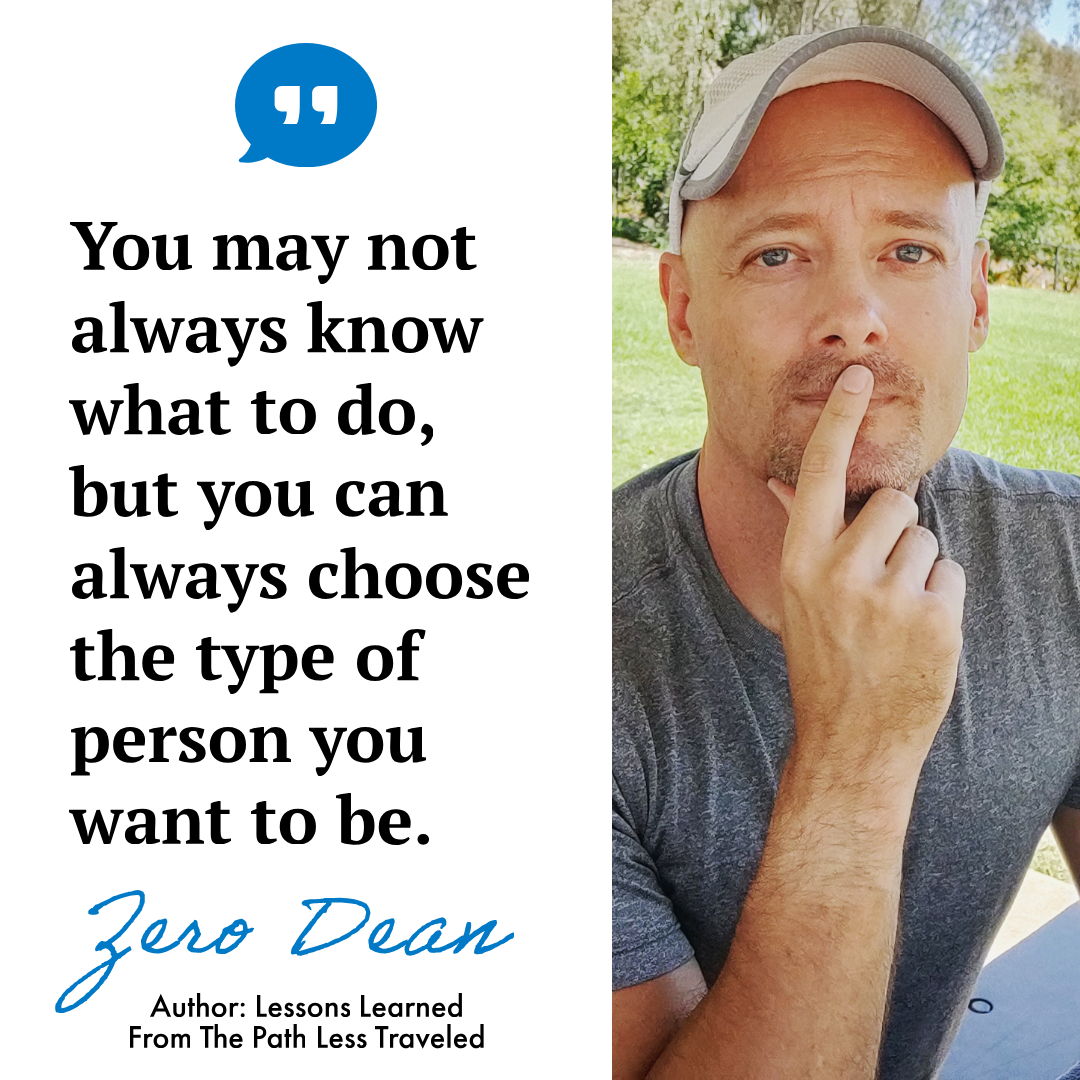 You may not always know what to do, but you can always choose the type of person you want to be.

While everyone wants to feel like what they have to offer is of value, entering into agreements where you will engage with other people’s posts if they engage with yours means that the engagement is no longer prompted by the value something offers, but instead by the value you hope to get in exchange for your engagement.

Social media is already an unfair system – which is why people seek to find ways to outwit it – and, generally speaking, it’s foolish to think that changing your behavior to manipulate a system in your favor is something that hasn’t already been accounted for. Especially when social media is made up of millions of people just like you who are seeking ways benefit from it. With enough data, your response to your experience on social media becomes predictable.

Every action you perform on social media – and many that you perform on your phone or in your computer browser – are tracked and analyzed. And have been since you joined their system. This is not done for your benefit, but for theirs. Again, with enough data, your behavior becomes predictable – especially when collated with the data of millions (or billions) of other people.

Social media companies are like casinos, they exist to make money and the systems that allow them to do so are forever slanted in their favor. The more a company can manipulate people into changing their behavior, the more predictable people become and the more money a company can make.

If you’ve fallen into a pattern of changing your behavior on social media from what was once authentic & natural to something that is inauthentic & calculated in order to manipulate social media to work for you, understand that this behavior has already been accounted for and the only thing truly being manipulated is you. 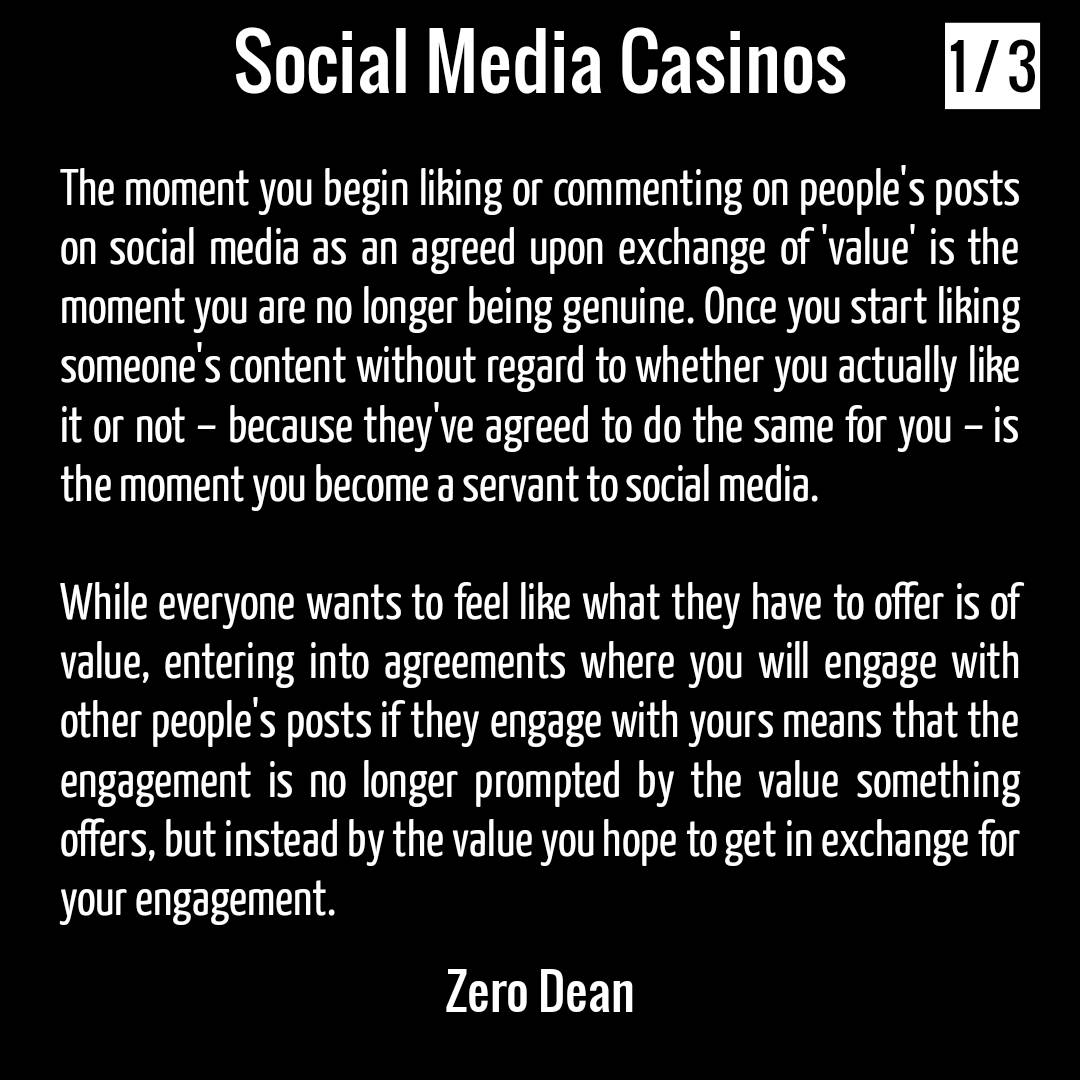 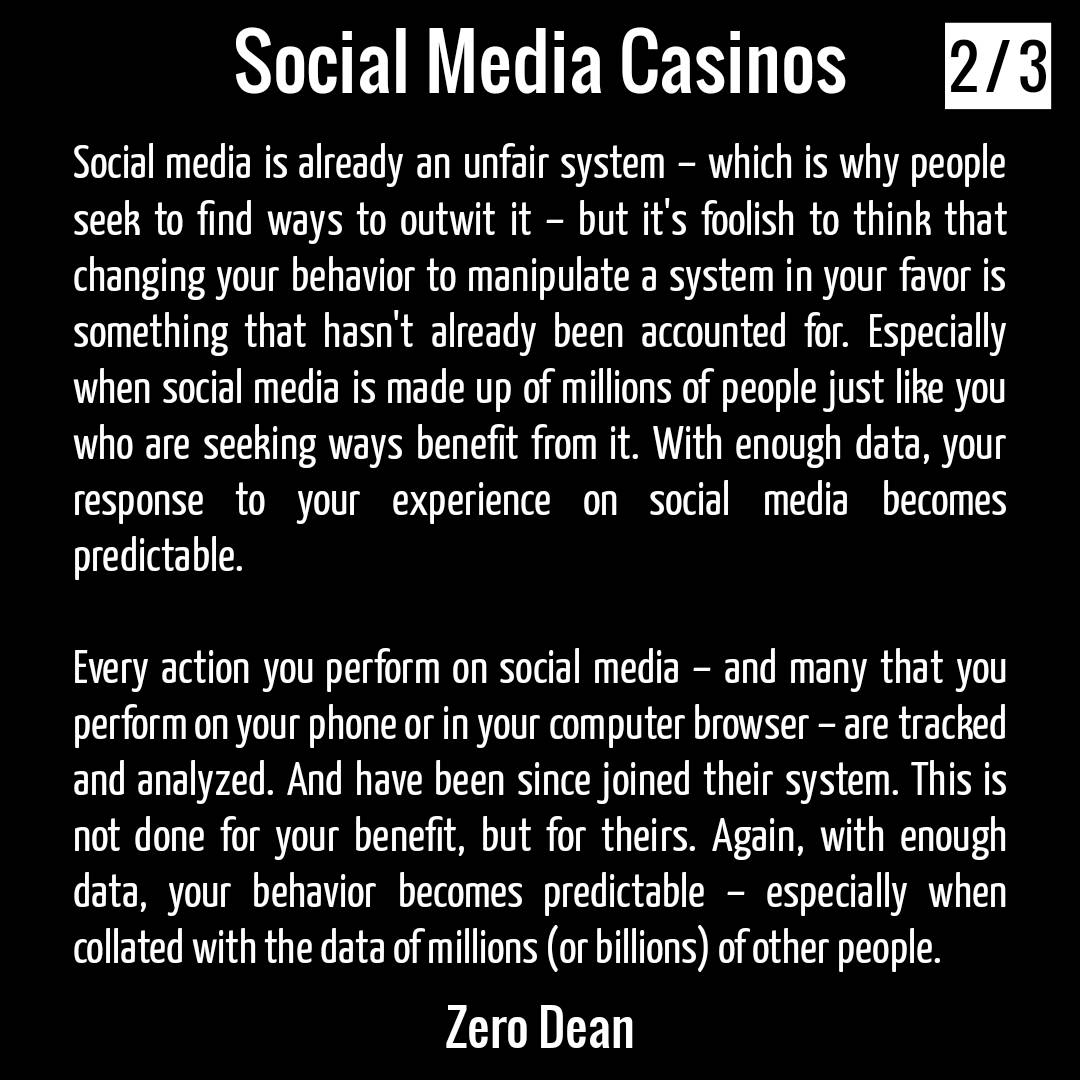 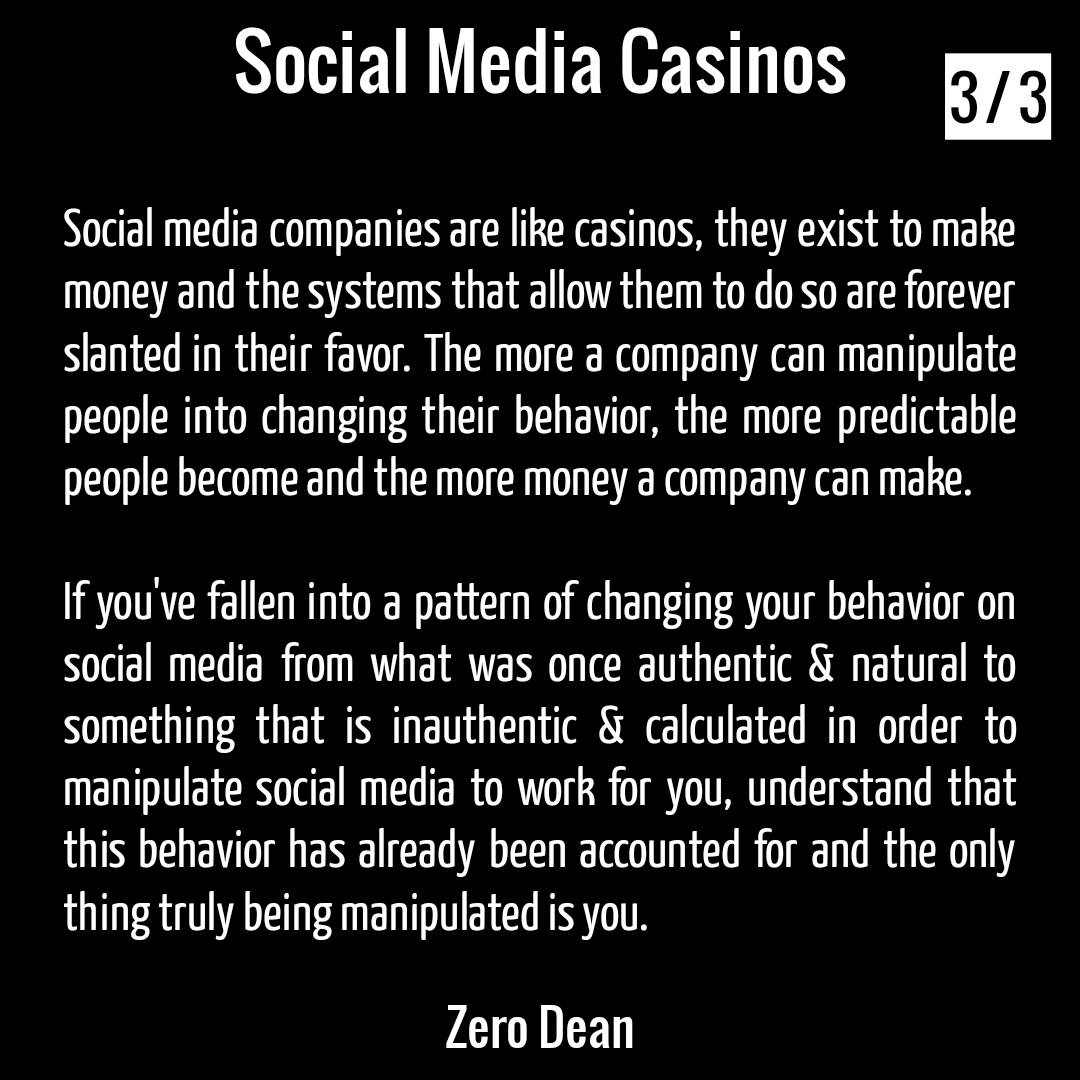 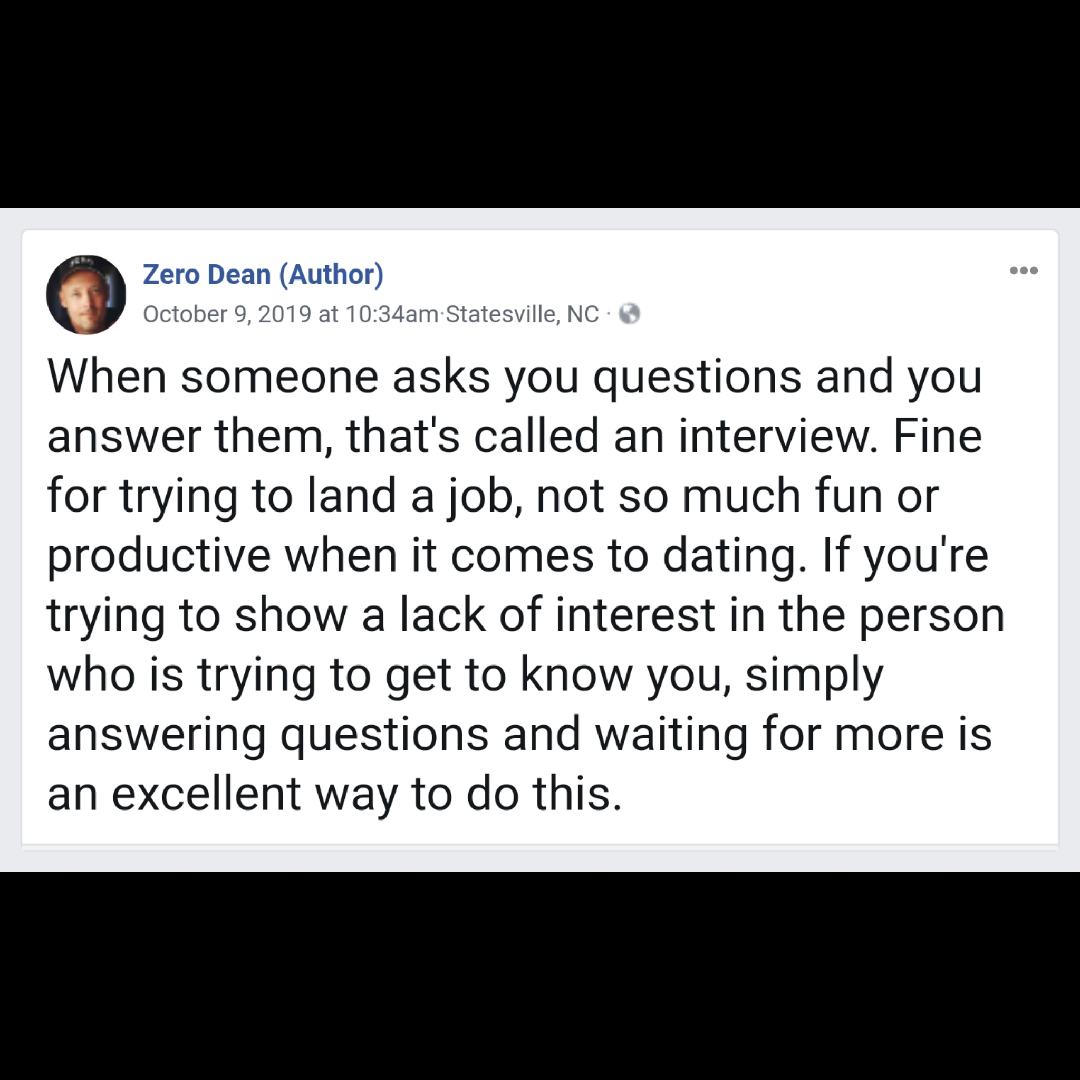 When someone asks you questions and you answer them, that’s called an interview. Fine for trying to land a job, not so much fun or productive when it comes to dating. If you’re trying to show a lack of interest in the person who is trying to get to know you, simply answering questions and waiting for more is an excellent way to do this.