People who are more concerned with their status and their bank accounts than whatever it was that allowed them to gain what they got.

We deserve better than the status quo.

We deserve better than politicians who sell themselves to the highest bidder, regardless of the evils that bidder represents.

We deserve better than a media that cares more about ratings & spin and sponsors and the next election cycle than the truth.

We deserve better than corporations that sabotage each other and impede progress & growth to simply make their stockholders happy.

We deserve people with integrity that we can trust. We deserve companies racing into the future with advancements that will benefit all and not just the elite. These kinds of people & companies deserve the headlines every day.

Not some celebrity having a baby. Not some singer releasing a remix. Not some deranged killer. Not another unfaithful, outrageous, drug addicted, alcoholic, or corrupt politician.

Yes, they do exist, but we rarely see them because the press believes we would rather hear about celebrities acting badly than “the crazy ones” trying to change the world.

No wonder people are cynical. We are bombarded with the worst of humanity 24 hours a day, 7 days a week.

The fact that the McRib is ever back isn’t news. We should be appalled that it is.

The fact we are striving for Mars and the stars is news. The fact that some envelope-pushing companies could use your support is news.

We deserve organizations striving for peace and harmony, not trying to perpetuate wars for the military complex that profits from them. Yes, war is a business and business is good.

But not for us.

We owe it to ourselves to find better heroes than those who simply use our attention for profit rather than the betterment of humanity.

We deserve heroes that don’t need to highlight their accomplishments every time they make a media appearance for us to believe in them.

We deserve heroes that seek to inspire more heroes and not just inspire people to follow them.

We deserve better. We can do better.

“Here’s to the crazy ones. The misfits. The rebels. The troublemakers. The round pegs in the square holes. The ones who see things differently. They’re not fond of rules. And they have no respect for the status quo. You can quote them, disagree with them, glorify or vilify them. About the only thing you can’t do is ignore them. Because they change things. They push the human race forward. And while some may see them as the crazy ones, we see genius. Because the people who are crazy enough to think they can change the world, are the ones who do.” — TBWAChiatDay 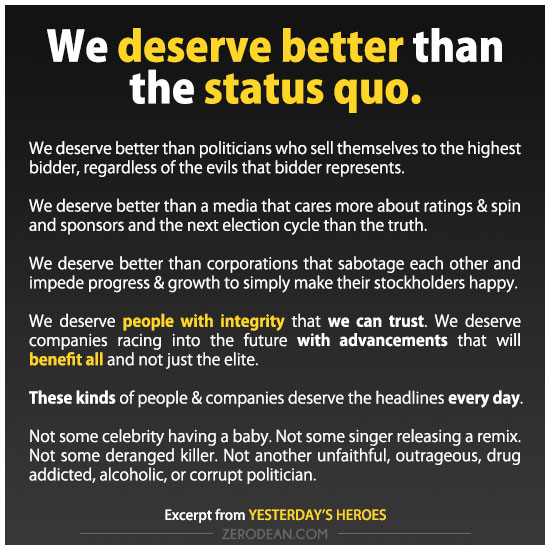