Skip to content
If your presence doesn’t add value, your absence won’t make a difference.

PrevPreviousEvery day is an opportunity to be the person you truly want to be.
NextThe words you put in people’s mouths are your ownNext

“But if I take the path less traveled I might end up feeling lonely and isolated.”

And if you take a road trip, you might get a flat tire or into an accident.

And if you take a walk in the woods, a tree may fall on your head or you may be attacked by a pack of rabid squirrels.

“‘Supposing a tree fell down, Pooh, when we were underneath it?’
‘Supposing it didn’t,’ said Pooh after careful thought.
Piglet was comforted by this.” — A.A. Milne

The fact is, if you do anything in life and take any sort of risk, something “bad” may happen to you as a result.

Or it may not.

But the same could be said if you don’t do anything at all.

Some people choose to drift through life. They follow the path of least resistance and simply go wherever it leads. Their idea of an adventure may be running low on gas on the way to the gas station. Or if they are feeling especially adventurous, taking a tour guide-driven trip to an inactive volcano.

And that’s fine. Not everyone values the same things in life.

“The one who follows the crowd will usually go no further than the crowd. Those who walk alone are likely to find themselves in places no one has ever been.” — Francis Phillip Wernig

If you want to avoid feeling lonely and isolated at times, then following the crowd is certainly one way to attempt it. Although, it is also quite possible to sit in a room full of people and feel isolated and alone.

“Loneliness does not come from having no people about one, but from being unable to communicate the things that seem important to oneself, or from holding certain views which others find inadmissible.” — Carl Jung

In reality, there are only so many things you can control in life. But the decisions you make and the life you lead as a result of those decisions is one of them.

It’s not so much what happens to you in life that matters as how you choose to learn from and respond to what happens. Because you can’t control everything that happens, but you can control how you respond to it.

Just because you may do something that makes you feel lonely and isolated doesn’t at all diminish the act of doing it and what you learn or how you grow as a person as a result.

Choosing the path less traveled is about finding one’s own way and using what one learns along the journey for the betterment of one’s self (and others).

And you may just find that you have what you need *within you* to overcome feelings of loneliness and isolation. You may just find you are a lot stronger and more resilient than you believed. You may just discover you don’t need to rely on others to give you an identity.

And you may also find that you like it that way.

“I think it’s very healthy to spend time alone. You need to know how to be alone and not be defined by another person.” — Olivia Wilde

There is a reason so much ancient wisdom revolves around knowing thyself.

It is very difficult to truly know one’s self if all one has ever done is what they’ve seen others do.

It is very difficult to know one’s self if one has never spent a prolonged period of time alone in one’s thoughts and away from the influence of family, friends, mass marketing, and the media.

And it is very difficult to grow stronger without resistance. And you don’t get so much of that following a crowd as you do by plotting your own path from time to time. 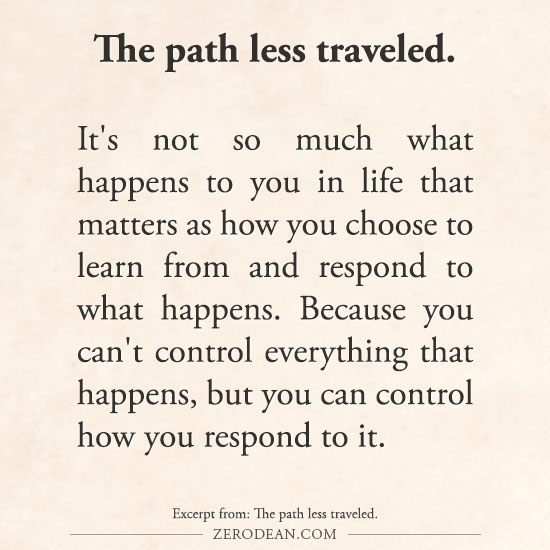 PrevPreviousEvery day is an opportunity to be the person you truly want to be.
NextThe words you put in people’s mouths are your ownNext