Home » All Content (blog view) » Zerosophy » The influence of you.

PrevPrevious“I could do that.”
NextDon’t be deterred from the greatness within you.Next

The influence of you.

The power of your influence nearly always appears smaller than it actually is.

Just because people don’t always appear to register whatever message you have to share doesn’t mean you should give up sharing it.

If it’s important to you, and your goal in drawing attention to something is for the greater good, then continue to find positive ways to spread that message, regardless of who you think is getting it.

As human beings, we have done some incredibly stupid and harmful things — to each other, the planet, and other lifeforms on it — simply because everyone else was doing it (so it must be ok).

Hivemind and group social dynamics are very powerful and can actively work against sound logic.

So even if your message it is backed by overwhelming evidence, if it is contrary to popular belief means it will most likely be rejected before it is accepted. In fact, a study by Cornell University found that that people are actually biased against creative ideas (and “creative” can basically apply to anything that isn’t considered standard).

So whatever cause you believe in, if it isn’t already popular, prepare for a struggle to be heard.

But also know that there are always those who are open to hearing your message, even if they don’t fully agree with it (and that’s ok), or live by it.

For example, you don’t have to advocate vegetarianism to still be concerned about how damaging the production of beef is to the environment.

As long as you are not being disrespectful or advocating harm to others, those who are at least peripherally aware of your cause may eventually come to realize the value — or at least some of the value — in what you have to share.

And that’s a start.

You can’t change the entire world at once, but you can influence those you come in contact with by spreading your message in a positive way and setting a good example to follow.

But whatever you do, causing intentional harm to others should never be an option.

If your values and the content of your message ring true, they will speak more powerfully than force ever will. 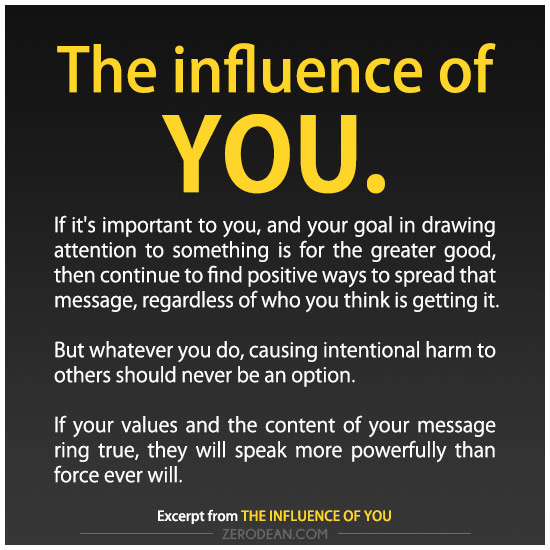 PrevPrevious“I could do that.”
NextDon’t be deterred from the greatness within you.Next