PrevPreviousA mission of kindness
NextHow big is your box?Next

I’m paraphrasing the above quotes from reviews of one of my favorite books last year. Some of the actual reviews are far more brutal — and there are many more just like this.

I mean some people really hate this book.

And that’s a pretty sure sign that something is wrong. Right?

So what should the author do? Should they take the criticism to heart and curl up in a ball on the floor? Should they give up writing? (Some people have suggested as much).

Maybe they should seek ways to ensure that their next book — if they can muster the motivation to write one — appeals to these “haters” in some way so as to not to attract such harsh criticism?

They could do that.

In fact, it’s not that uncommon for people to not only change their creations to please others, some even go as far as to change the unique things about themselves in order to be more like those that get better “feedback”.

But I think that’s a mistake.

It may surprise you to discover that the book I’m referring to currently has a solid 5 star rating on Amazon. It has also been one of the best-selling books in its genre since it was published.

So — depending on how you look at it — it’s not so bad after all.

But what about these 1 star reviews? Are they invalid?

No. Of course not. Because an opinion is just that, an opinion.

Even if you’re only in the 1% of people who either do or don’t like something, it doesn’t make you “wrong”. It just means that, for whatever reason, you are not among the appreciative audience the something was intended or most suited for.

“You can be the ripest, juiciest peach in the world, and there’s still going to be someone who hates peaches.” — Dita Von Tease

And while I’m talking about a product and reviews, this also applies to people and criticism about one’s self or one’s creations.

The next time you feel rejected, criticized, or cross paths with someone who sees things differently than you do, I encourage you to remind yourself that it is likely impossible to be universally liked. And in order for nearly anything to truly have mass appeal, it must also situate itself within a very narrow spectrum so as not to offend, or bore, or turn off anyone.

And often, the moment something gains mass appeal, people criticize it for exactly that reason.

Even people who donate millions of dollars to charity receive complaints from folks who don’t think it was the right charity, or the right time, or the best use of that person’s money.

It’s very rare that you can ever do what you consider a good thing that everyone who hears about it will appreciate.

Remember this the next time you run across someone who has a different opinion than you do, or who criticizes you or something you produce. It doesn’t necessarily mean they are wrong, but it more than likely means they are simply not among the people you or what you produce is most suited for.

What really matters is making — and doing — the things you want to do for those they are intended for and not wasting your time trying to please or appease those who will never get you — or what you have to offer — no matter how hard you try.

What is the book in question? It doesn’t really matter.

Because it could be any book. Or any movie, or song, or literally anything anyone has an opinion about one way or the other.

If you’d like to try an exercise, I suggest going and reading the negative reviews for one of your favorite books or movies. Then, go read the positive reviews for a book or movie you really disliked.

Doing this can help provide added perspective because it reminds us of what it feels like to be at both ends of the spectrum — and neither end is “wrong.”

I think Bill Cosby said it best, “I don’t know the key to success, but the key to failure is trying to please everybody.” 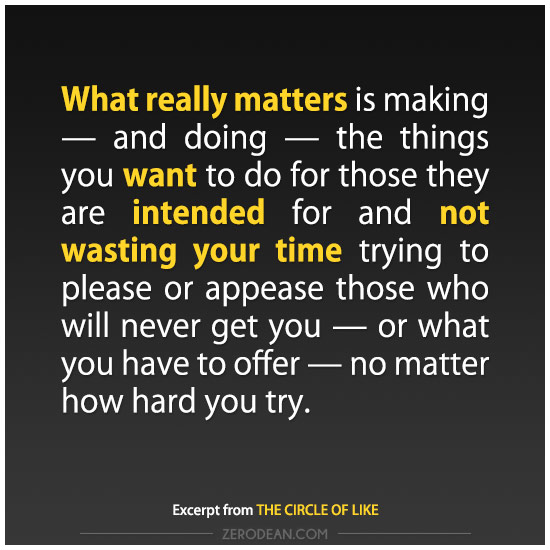 PrevPreviousA mission of kindness
NextHow big is your box?Next