“I get so annoyed when people…”

“If this person [performs annoying action], I’m going to respond by [acting badly]….”

Often, when we think things like this, we’re not only setting ourselves up to harbor negativity and carry unnecessary stress, we create triggers for future negative thoughts & feelings.

“I get so annoyed when people…” not only creates the expectation that we will feel annoyed when something we expect to annoy us happens, we essentially give ourselves permission — in advance — to be annoyed when it happens.

And in the worst cases, we take it a step further and use our annoyance as an excuse to behave badly.

“If customer service doesn’t give me the answer I want, I’m going to lose my shit.”

Remember, crossing paths with an idiot is not an excuse to also act like an idiot.

We often deal with situations on automatic pilot and forget that getting annoyed — or at least staying annoyed — is a choice. We don’t have to let the bad behavior of others affect us as much as we often do.

How much more effective it would be if, instead of creating a negative expectation, we created a positive one:

“The next time I encounter something that annoys me, I’m going to handle it in a positive way.”

It’s much easier to handle the negative situations we encounter in life when we expect — or better yet, train ourselves — to deal with them productively.

We certainly don’t have to let the bad behavior of others cause us to act badly or lose our shit in response.

“That guy cut me off, so I’m going to do the same to him. That’ll teach him!”

The “lessons” we often try to teach people by acting badly are often lost on them. Rarely does the recipient of bad behavior respond with, “Wow, you’re right.”

On the contrary, it often provokes more bad behavior and more negativity.

If you want to teach someone a “lesson”, be a role model and set a good example.

Don’t let the bad behavior of others be an excuse to also act badly.

You’ll know you’re on the right track when, if everyone imitated your actions, the world would be a nicer place. 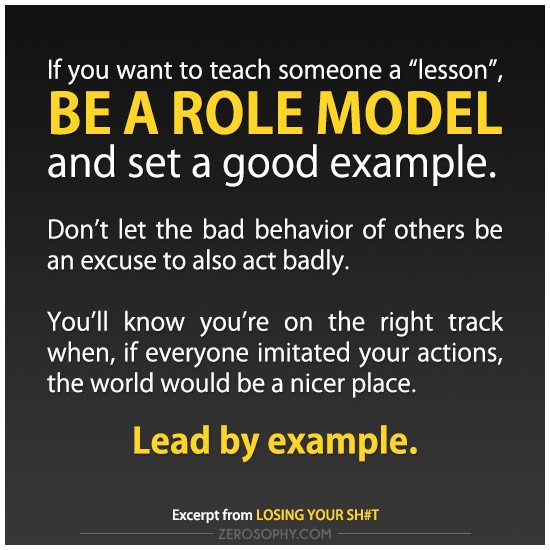