Skip to content
Fear of self-expression is a form of self-imposed slavery.

PrevPreviousIt’s not a deal if…
NextThe justification of everythingNext

One less rhinoceros (intentions vs actions & dealing with mean people)

Treating people poorly in order to teach them a lesson — or to change their behavior in a positive way — is extremely ineffective. Furthermore, being disrespectful to people — because you think they deserve it — in order to get them to behave better often has the opposite effect.

Rather than give those who offend you an incentive to change, it often makes them feel more justified when they act badly (from your perspective) or do something contrary to your desires.

“Get a job you dirty bum!” isn’t helpful.

There isn’t a bum in the world who’s going to respond by saying, “This is good advice. I didn’t think of that. Thank you, sir. I’ll do it!”

Being rude to someone in order to elicit a positive change in behavior helps no one.

What about mean people, surely they deserve it?

No, it doesn’t generally work out that way.

By being mean to a mean person, you’re simply showing that person a type of behavior they’re already familiar with. And because it’s not new, it teaches them nothing.

It isn’t a lesson.

In most cases, all your negative actions will do is demonstrate that you can stoop to their level — or worse, you’ve just made a good example of how being mean to someone can be effective at inflicting pain.

No one wins this game.

“But they were rude to me! They were asking for it!”

Being rude to someone because they were rude to you isn’t an excuse to act badly. You are always responsible for how you act, regardless of your intentions or how you are feeling.

The Power of Perspective

It is important to note that we judge ourselves by our intentions, but we judge others by their actions.

Cutting a guy off in traffic to teach him a lesson because his driving offended you in some way doesn’t work. From the other person’s perspective, it’s you that’s being offensive, not them.

Your offensive actions — as justified as they may seem to you — are not reasonable to the person who has to deal with them.

This difference in perspective is an important concept to understand because it affects every aspect of our lives where people are involved. Not only people, but companies and organizations as well.

Most people, no matter how badly they act, think they’re doing “good” for someone, even if that someone is simply themselves or, in the case of companies, their stockholders.

“I’m just following orders because I don’t want to lose my job. And if I lose my job, I won’t be able to support my family.”

Many poachers, for example, risk their lives to kill endangered animals not for sport and not because they don’t like the animals, but because it’s one of the few ways they know how to survive and support their families.

It doesn’t make it right, but from their perspective, they are justified in their actions.

“What is the life of a single rhinoceros if it can support my family for 5 years or more?”

And thus, we have one less rhinoceros. And then another. And another.

Everyone feels justified by their intentions in some way — regardless of what their actions may mean to other people, endangered species, or the environment.

Sometimes we’re the bad guy and we don’t even know it.

This is why an important habit to get into is to sometimes stop and ask yourself — regardless of your intentions — whether your actions in any given interaction are truly positive or negative.

“Is what I’m doing a true reflection of what I want out of this exchange and can I be proud of how I’m acting?”

Alternatively, it may help if you imagine the people you respect & admire most in the world are watching.

If your heroes were watching, would your behavior be something they would be proud of?

People only change when they want to.

You won’t change people for the better by treating them poorly, but you can influence people through caring, understanding, and by setting a good example.

You can treat and deal with people in a manner that suggests that there’s a better way than being rude, abusive, or revenge-seeking.

You can use the power of effective communication to say what you mean instead of resorting to offensive and aggressive tactics.

And sometimes it’s important to remember that it isn’t always other people that could benefit by altering their behavior and making changes for the better. 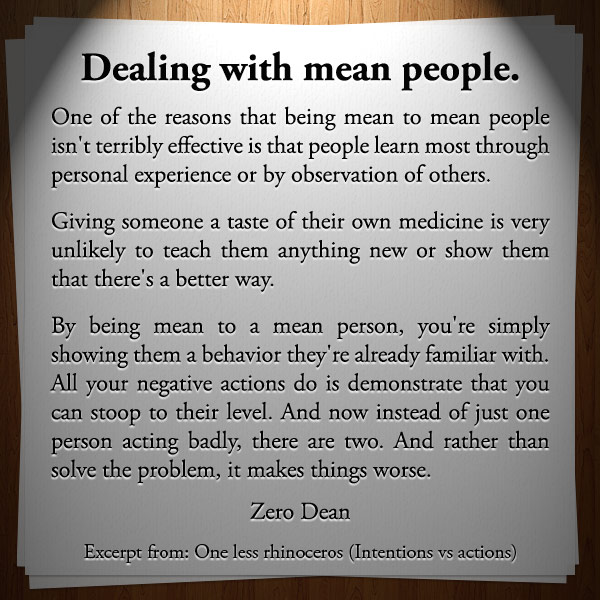 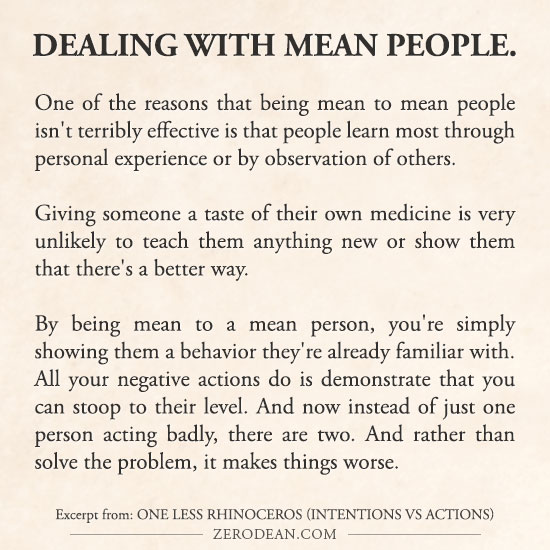 PrevPreviousIt’s not a deal if…
NextThe justification of everythingNext