Skip to content
It’s better to be the indispensable lead of your own life story than a dispensable part of someone else’s.

Home » All Content (blog view) » Zerosophy » Depression. You’re having a bad time. Not a bad life.

PrevPreviousIt’s all there for you if you want it.
NextThe biggest theme park in the world.Next

Depression. You’re having a bad time. Not a bad life.

Authors note: At the time I wrote this, it was actually directed towards a friend who was going through a really hard time (on facebook). I’m not sure they ever read this post — and it had a different title — but I know they occasionally read my posts (and still do) — so I put it out there in case the universe directed them to it. In any case, I’m happy to report they bounced back.

And no one escapes completely — we all have “bad times”. And that may seem obvious, but mostly when you’re not in the middle of one.

Even for those of us who seem so positive, optimistic, and cheerful all the time (something I’ve been accused of on occasion), there isn’t always an escape from hard times when Trouble — with a capital T — comes calling.

And let me be clear here, I’m not talking about the little things like burning your toast or dropping your phone or being denied entry into Canada or destroying your dream laptop with coffee or having $5,000 worth of bikes stolen or being escorted out of Starbucks by 2 police officers…

I’m talking about the times when it seems like nothing is going right — and it feels like the whole universe is acting against us. The times that we feel like we’ve been abandoned by everything good — or screwed up everything good — and that we’re all alone and that there’s no escape from the dark cave of a place that we find ourselves in.

And while we’re feeling like this, none of that really matters anyway.

Because no one really cares. Do they?

Sure, people may say that they care, but their words don’t matter because they just don’t get it — and they just don’t understand us or what we’re going through right now.

How could they “get it”? They can’t possibly be dealing with the same things as we are right now — they are not us.

And since we feel like no one can truly identify with what we’ve got going on — we resist letting anything they say sink in. I mean, why should we?

Sure, we can see that they’re truly trying to be supportive — they may even be putting in a lot of effort to make themselves heard — but their words don’t sound real or carry any weight.

And to top it off, we feel bad about that, too — because we actually know we should know better.

We know we should care about the people sending us support — or the people who would send us support if we actually bothered to let them know how we were feeling.

But there’s no sense in sharing our pain, right? I mean, we’d probably just be bothering them anyway — no sense in troubling someone else with our troubles, right?

Besides, even if we did tell them how we were feeling, we know we’re not really ready to listen to what they have to say anyway.

And they don’t even have to say it — we already know that we should stop feeling sorry for ourselves. We already know we should just suck it up, put one foot in front of the other and plow forward, but… we just can’t. We want to feel better. But we’re not ready to. Everything is all just so damn heavy — and we’re so tired of all this. And it’s all just bullshit anyway.

And speaking of bullshit — what we’ve got going on isn’t the sort of thing that some silly sentimental saying is going to miraculously make better.

We know those motivational quotes — and we’ve watched those inspirational videos — maybe even tried using those things to try and make other people feel better at times. But those won’t work on us — not now.

Perhaps we just need a different perspective —  yeah, we know there are people in the world who have been or are much worse off than we are — and by the way, thanks for adding something else to feel bad about to the list.

No, wait — I don’t mean that. Damnit. What am I saying? Now I feel bad about even making a big deal about feeling bad — because I know I should know better — but you know what, I just don’t care!

So eff the world!

Maybe the above line of thinking sounds somewhat familiar — maybe not.  It doesn’t really matter if it’s an exact “match” because what matters is that…

None of it is really THAT simple (and you know it).

Because you know that whatever you focus on only grows stronger — and if you’re feeling that bad about your world, then you certainly aren’t focusing on what’s going right in your life. In fact, you probably don’t even see anything actually going right — and even if there is, you don’t feel like looking for it right now.

Because if all you’re thinking about is all the crap and all the things going wrong in your life, or the world — or the entire history of the world — that’s what is going to take center stage — and it’s going to pull out all the stops to stay there. It might even distort reality a bit — telling you to re-interpret things that have happened in your life in order to make them appear much worse than they actually were.

Some things that used to be good or neutral in your mind, no longer are. You’ve re-interpreted them as bad. And now what may have started as a small issue, keeps getting piled upon with new things that you’ve decided to add — simply because you’re in the mood to.

So not only is the crap you’re focusing on going to take center stage at the expense of everything else in your life, but it’s also going to appear significantly bigger and badder than it actually is.

It may be difficult at first, but if you think about the things that actually work in your life (or have worked in the past) and what you’re grateful for (it helps if you start small), they come back into the picture and start taking up space on the stage.

“But I’ve lost something!”, you say. And that may be true, but you’ve still got a lot, too — and if you think about it, even with your loss, you probably have more in your life than some people ever get.

But sometimes, before you get to that point and the healing begins, sometimes you just have to vent and scream at the sky.

Been there, done that — and sometimes it helps.

Just don’t forget to breath. And don’t make any significant decisions before you’ve taken some time to rest and given yourself a chance at a different perspective. Because the world always looks different when you’re in the thick of it. Give yourself a chance to see things differently.

And yeah — perhaps you’ve got some truly nasty shit you need to take care of, but you can do it.  This is your test and your time to shine. It may not feel like it. And you may feel clumsy as heck. And you don’t have to enjoy it, but just know that you can do it. You’ll get through this.

This too, shall pass.

You are having a bad time, not a bad life.

Because remember that time you just couldn’t stop laughing at that thing, what was it? That was awesome, wasn’t it?

Remember that time when you laughed so hard you shot milk out your nose — or was it your friend’s nose? Yeah, that actually happened.

Remember when you were just chillaxing and it felt so good to not be doing anything else? Good times.

Remember that time you were moving with such style and flair because things were totally rockin’ that day? And come to think of it, it really wasn’t that long ago, was it?

One day, you’ll look back and realize that this all had to happen to get you to where you needed to be. That you learned from this and you gained skills from this that made you a stronger and better person. You may not see it now sitting in the dark, but it helps when you start looking for the light.

So go find something to laugh at. And keep laughing.

Life is too short to take it so seriously — especially when we boil our lives down to the absolute worst things we can find when we’re sitting in our dark caves feeling bad about it.

Whatever it is, this too shall pass.

“Being happy doesn’t mean that everything is perfect. It means that you’ve decided to look beyond the imperfections.”

What you don’t see is what’s written in big letters at the bottom of the page:

THIS TOO SHALL PASS. 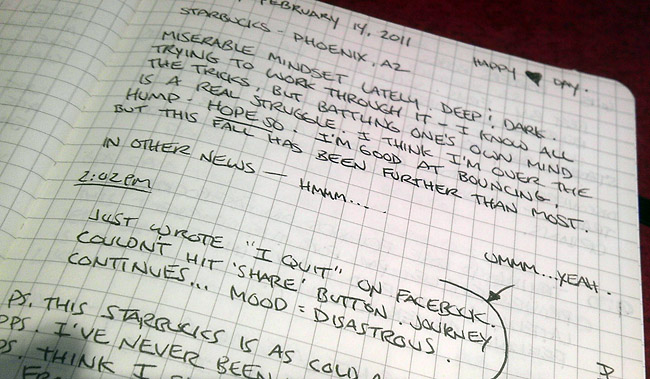 PrevPreviousIt’s all there for you if you want it.
NextThe biggest theme park in the world.Next