Probably the worst, patently false meme I’ve seen in a while:

“Listen to people when they are angry, because that is when the real truth comes out.”

People are much more likely to say intentionally hurtful things when they’re angry — and many times, these things are not at all a reflection of the truth.

“Speak when you are angry and you will make the best speech you will ever regret.” — Ambrose Bierce

Anger is often referred to as a “secondary emotion” because it’s most often the result of feeling something else: hurt, rejected, scared, grief, or vulnerable.

When people are in this state is not a time others should rely on them to communicate clearly, or rationally. Nor is it a time when one should take special care to listen for the “real truth”.

“Anybody can become angry — that is easy, but to be angry with the right person and to the right degree and at the right time and for the right purpose, and in the right way — that is not within everybody’s power and is not easy.” — Aristotle

Anyone who has ever been a teenager can probably remember saying something intentional hurtful to their friends or parents (such as, “I hate you!”) — because they were angry and wanted to inflict damage, not because they were expressing the truth.

“One of the greatest lessons we can learn in life is how to keep mute when the boiling ring of anger is dropped within us.” — Ikechukwu Izuakor

This meme is confusing anger with the positive aspects of passion.

You want to know what someone’s personal truth is?

Listen to people when they’re excited. Listen to the ideas they love to talk about. Listen when they speak with enthusiasm. Listen to what they speak about with passion.

Because the fire that lights people’s passions is a far more reliable source of truth than whatever it is they say when they are angry.

“It is wise to direct your anger towards problems — not people; to focus your energies on answers — not excuses.” — William Arthur Ward

Passion, as I refer to it, is enthusiasm.

Mike: I think this flows out of a saying:

“The truth will set you free, but first it will piss you off”. (This is attributed most often to Gloria Steinem, but other people are occasionally credited with it, too.)

And there is something there. Sometimes people are angry when they discover they’ve been deceived and use that anger to set the record straight.

The problem is in assuming that anger is a reliable indicator of truth, when it clearly isn’t.

“Discontent is the first step in the progress of a man or a nation.” — Oscar Wilde

Like discontent, anger can sometimes have value as a trigger for change, but anger, as it is most often expressed, is negative. As a positive tool, anger is unreliable, at best. 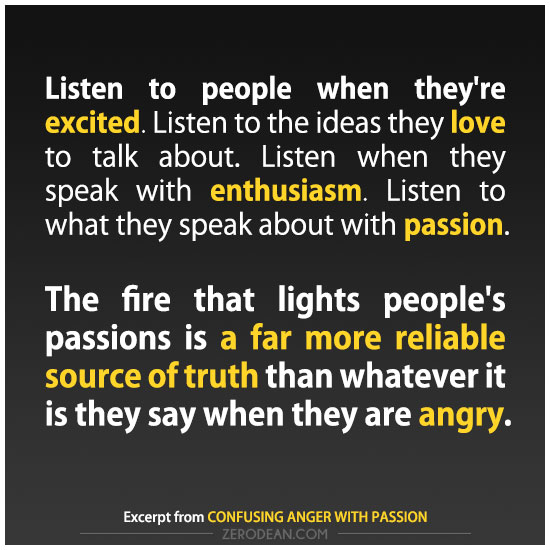