Skip to content
Stop wasting your time living someone else’s idea of the ideal life. 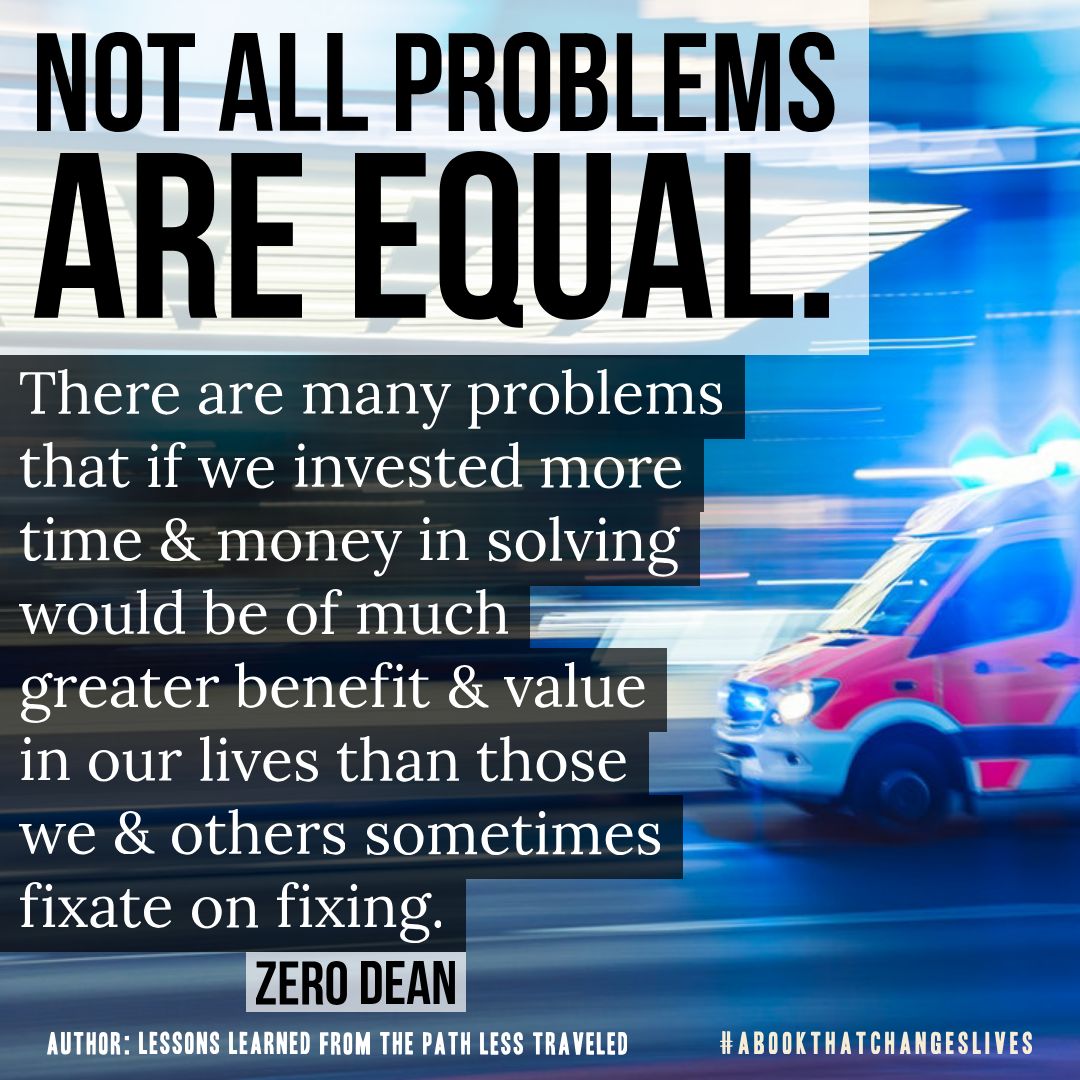 Not all problems are equal. There are many problems that if we invested more time & money in solving would be of much greater benefit & value in our lives than those we & others sometimes fixate on fixing. 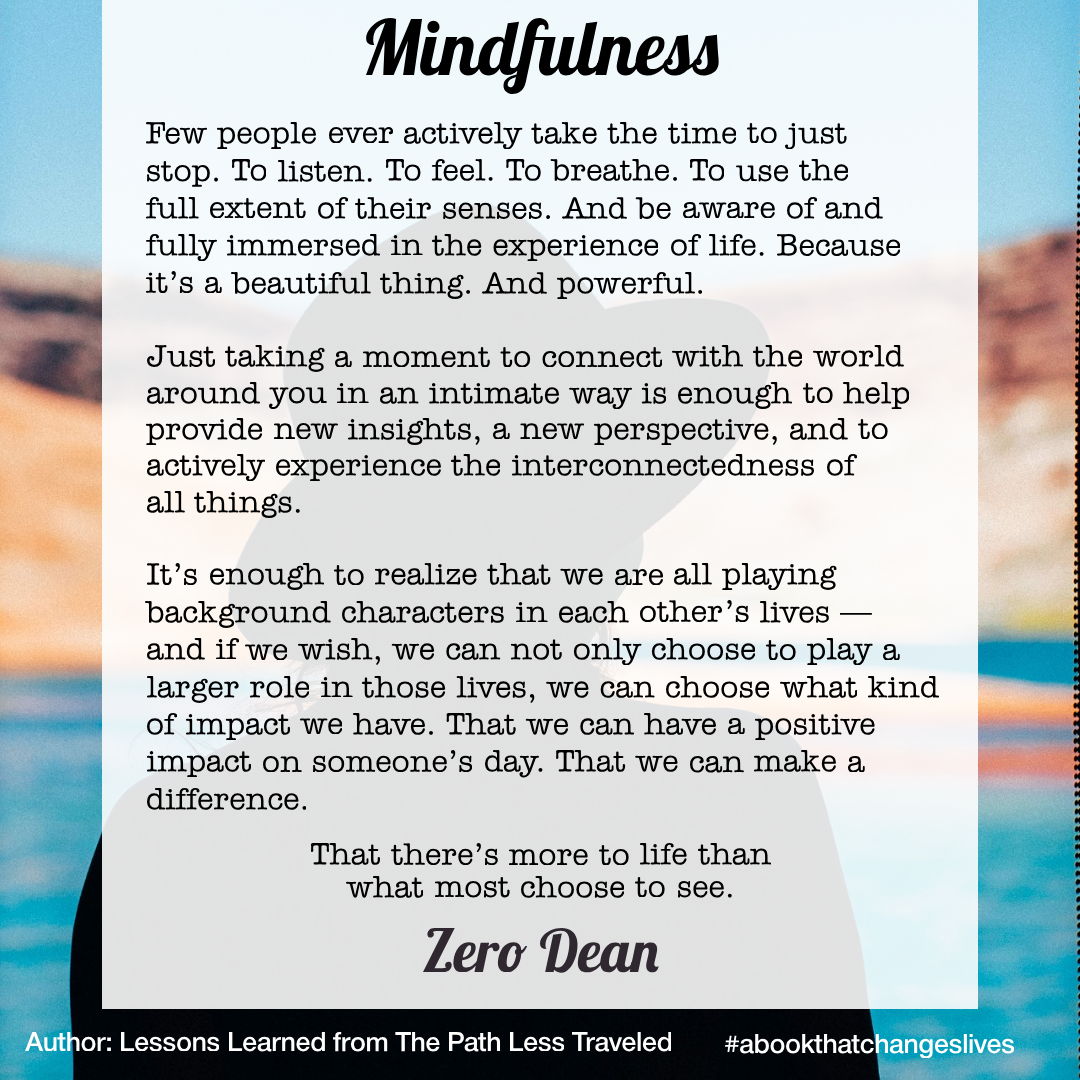 Few people ever actively take the time to just stop. To listen. To feel. To breathe. To use the full extent of their senses. And be aware of and fully immersed in the experience of life.

Because it’s a beautiful thing. And powerful.

“Looking at beauty in the world is the first step of purifying the mind.” — Amit Ray

Just taking a moment to connect with the world around you in an intimate way is enough to help provide new insights, a new perspective, and to actively experience the interconnectedness of all things.

It’s enough to realize that we are all playing background characters in each other’s lives — and if we wish, we can not only choose to play a larger role in those lives, we can choose what kind of impact we have.

That we can have a positive impact on someone’s day. That we can make a difference.

That there’s more to life than what most choose to see.

For those who missed my free book promotion, you can still read my book for free by signing up for a 30 day free trial of Kindle Unlimited. See: Amazon.com/shop/zerodean.author 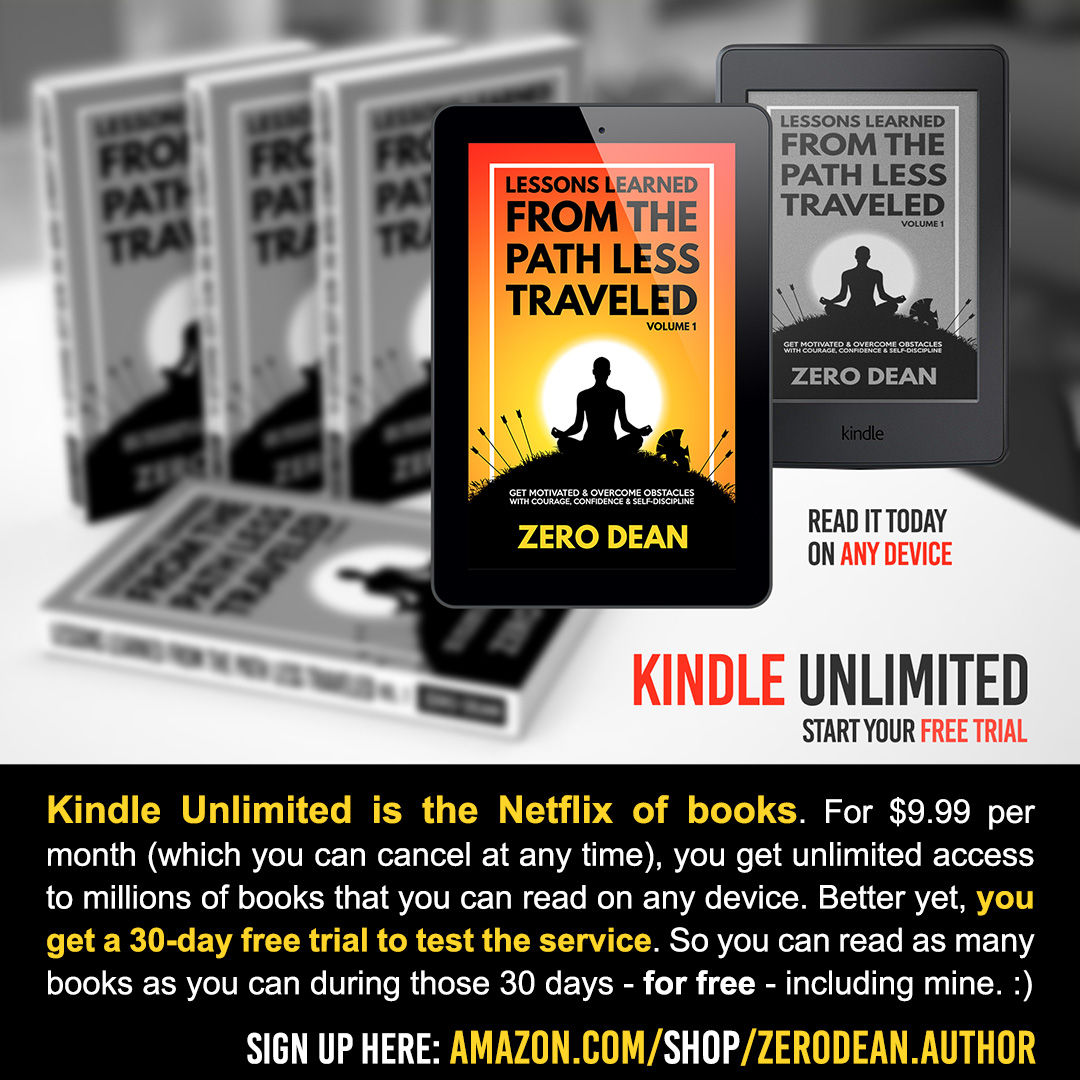 Kindle Unlimited is the Netflix of books. For only $9.99 per month (which you can cancel at any time), you get unlimited access to millions of books that you can read on any device. Better yet, you get a 30-day free trial to test the service. So you can read as many books as you can during those 30 days – including mine. :) 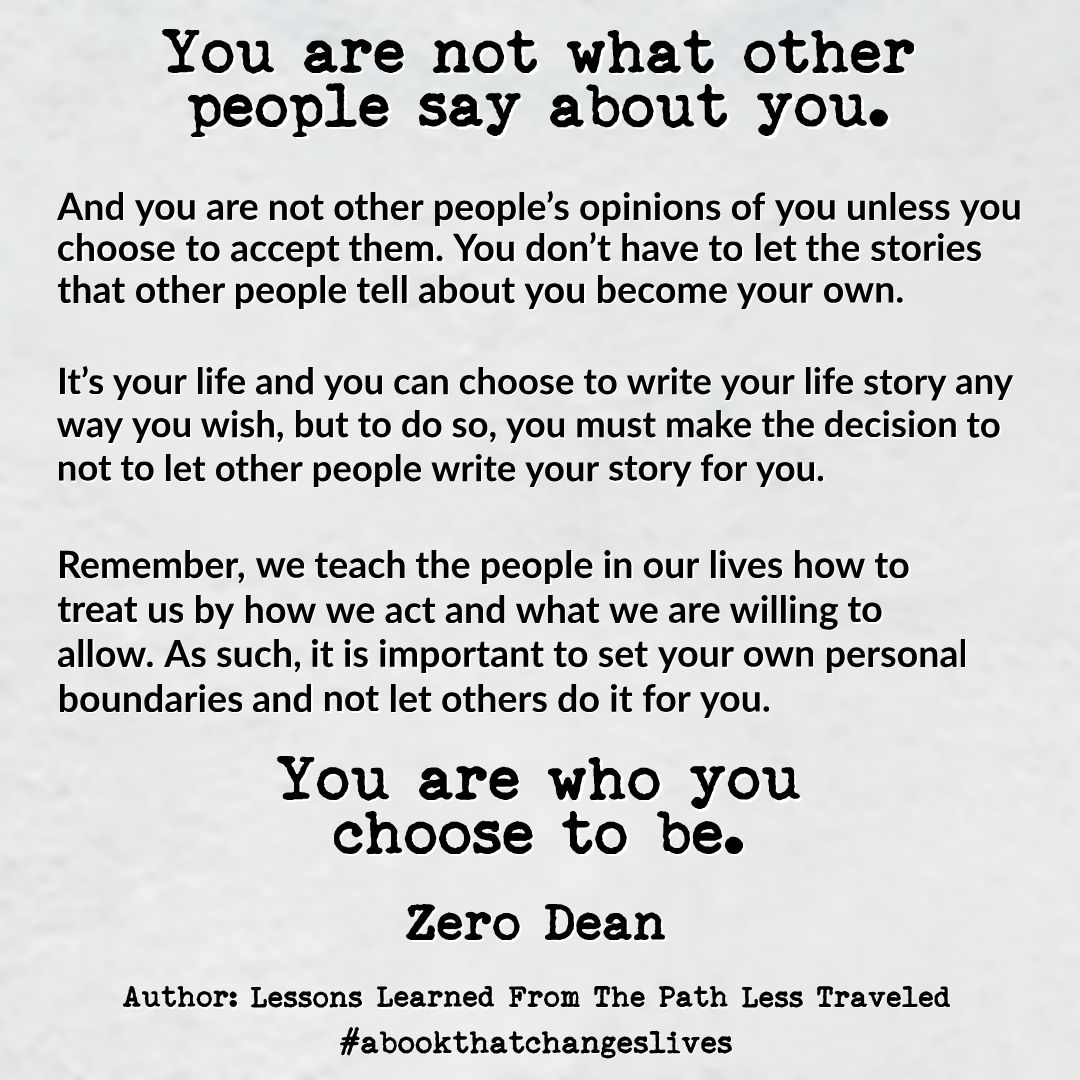 It’s your life and you can choose to write your life story any way you wish, but to do so, you must make the decision to not to let other people write your story for you.

You are who you choose to be. 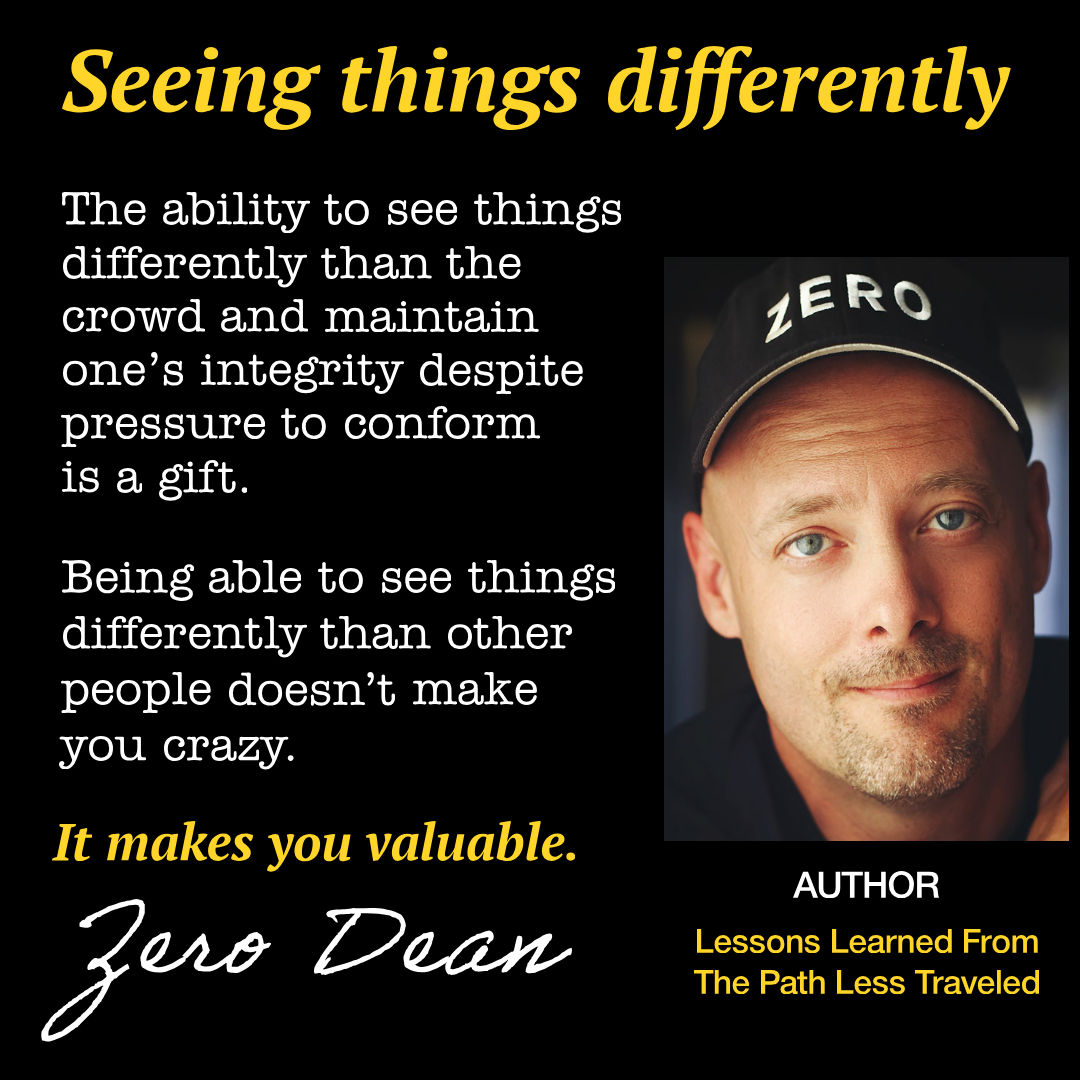 Seen in a meme:

“Sometimes I think I’m crazy because I see things differently than everyone else.”

You’re not crazy if you don’t always agree with the crowd. Group dynamics is one of the most powerful forces in human psychology.

The Asch conformity experiments demonstrate that even the most seemingly logical of people can be influenced to make bad decisions due to one’s internal desire to conform to group expectations.

“Groupthink is a psychological phenomenon that occurs within groups of people, in which the desire for harmony in a decision-making group overrides a realistic appraisal of alternatives. Group members try to minimize conflict and reach a consensus decision without critical evaluation of alternative ideas or viewpoints.

…The primary socially negative cost of groupthink is the loss of individual creativity, uniqueness, and independent thinking.” — Wikipedia

Group dynamics can cause people to act irrationally and at their own expense or the expense of others.

Group dynamics can cloud the truth, cause us to desire junk, turn us against people we love, and even follow & support leaders who would do us harm.

Group dynamics is often at the core of prejudice and discrimination.

Independent thinking is far less common than it should be. It should be praised.

It takes an exceptional kind of integrity to stick up for what you believe is right and true when facing a group.

Being able to see things differently is a valuable skill and is often what allows us to make great strides in technologies and processes that benefit all. Due to group dynamics, however, truly new and original ideas are often ridiculed before they are accepted.

“For a work to be truly creative, it has to depart from the status quo at some point. That departure makes many people uncomfortable.” — David Burkus (99u)

“The person who follows the crowd will usually get no further than the crowd. The person who walks alone is likely to find himself in places no one has ever been before.” — *Francis Phillip Wernig