Skip to content
There is a big difference between “I can’t” and “It just isn’t a high priority”.

Think of a group of people you don’t like.

Now realize there are people in the world who don’t like a group of people that you fall within.

Whether it’s because of your profession, the color of your skin, your cultural background or something else entirely, you are disliked by people who don’t even know you simply because you fall within a stereotype.

Think it’s fair? Probably not. They don’t know you or what motivates you, how could it be fair?

If you’ve ever been stereotyped and didn’t like it, then refuse to stereotype others no matter how accurate you think the stereotype is.

It should go without saying, but no two people are exactly alike.

Every person on the planet draws upon a unique history of life experiences that shape who they are, how they see the world, and how they act.

Refuse to rely on a generalization or oversimplification from which to judge a group of people.

Resist disrespecting and speaking badly about others just because family, friends, the media, or society considers it acceptable to paint an entire race, culture, or group of people in a negative light.

Whatever your lifestyle preferences may be, respect people enough to give others a chance to show who they are by how they act.

Some of the best friendships in the world are between people who don’t necessarily agree on everything. It is our differences from one another that help us grow and push us to see the world from a perspective other than the one we’ve grown most comfortable with.

ster·e·o·type
noun
1. a widely held but fixed and oversimplified image or idea of a particular type of person or thing.

[This is not to say throw caution to the wind when you are in unfamiliar territory. Be cautious, be aware of your environment, and understand & respect cultural differences. This is simply to say that if you don’t like being stereotyped, don’t stereotype others.] 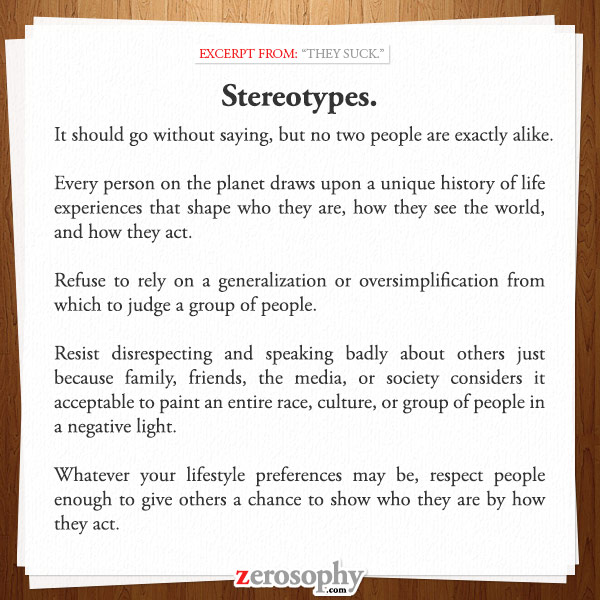