Skip to content
When you truly know who you are – and who you are in the process of becoming – you will no longer live in fear of what people say or think about you.

George Lucas, JK Rowling, The Beatles, and countless other success stories — all got rejected because someone thought there was something “wrong” with what they had to offer, but they all succeeded because they persisted anyway.

It should go without saying that no matter what you do or what your motivation is for doing it, there will almost always be someone to tell you that you’re doing it wrong.

At some point, you just have to learn to listen to your heart and your intuition and do what you feel is right, regardless of what the critics say. Because sometimes what’s considered wrong or flawed to one person, may be a work of genius to another.

Use feedback to make yourself, your actions, and your offerings more effective, but never give up doing what you want to do just because someone doesn’t “get it”.

Odds are, if you do anything worth doing and it initiates change for the greater good, someone somewhere isn’t going to like it. 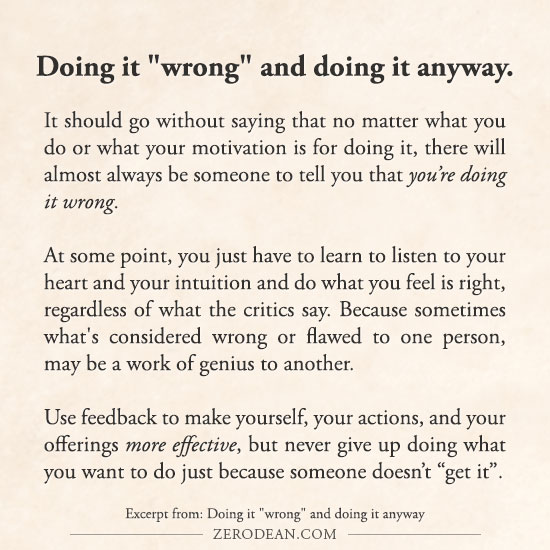