You don’t win points for liking something before it was popular or because it is old.

You don’t win points for judging people or criticising others because they don’t like exactly the same things you do.

You don’t even “win points” for simply being a decent human being, but you’re definitely more likely to earn the respect and admiration others if you keep an open mind and try.

If it brings someone joy and it isn’t causing harm, people should be able to like or do whatever they want without being criticized for it.

When you keep an open mind and look beyond differences, you’ll often find a common ground & things you can appreciate or work for together.

And you might just find life is easier when you see it that way instead of looking for things or people to have issues with.

People are more likely to be influenced by the attitude of others — and the examples they set — than they are by being criticized or having others impose their beliefs on them.

There’s enough judgement in the world. Enough name calling. Enough bullying. Enough “this vs. that” and “us vs. them”. Enough imposing of beliefs.

You don’t change people by telling them they’re wrong. 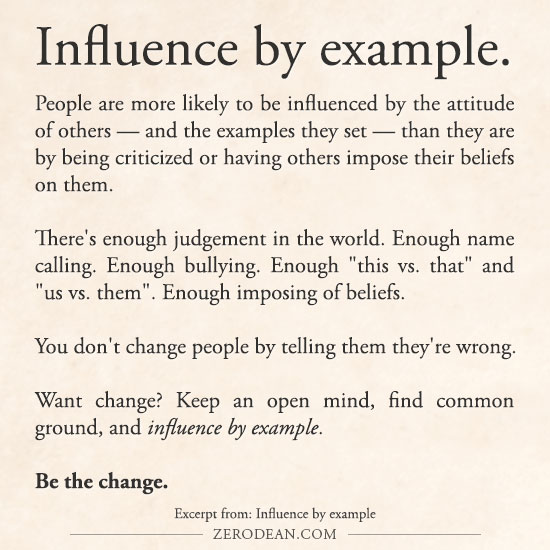