Just because someone has a lot of money in their bank account — and is considered “successful” by that standard — doesn’t mean their life is a blue print worth following.

Yes, controversy attracts a crowd, but just because someone has a strong moral compass or leads a life involving little to no controversy doesn’t mean they aren’t worthy of attention.

The folks worthy of emulating and drawing attention to are not those who do whatever outrageous things they can to get attention in order to put more money in their bank accounts.

They are those who live modestly and with integrity doing the right thing and whatever needs to be done regardless of who’s watching.

They could be your neighbor, a coworker, the founder of a non-profit. Anyone.

Stop simply accepting the commercially driven role models that are mass marketed to you. You’re playing their game. And they’re winning. Every time we give them attention, we give them free advertising and power. Power that is often abused.

Hold your idols to a higher standard than simply being famous for being famous. Find people worth admiring, whether they are famous or not.

We owe it to ourselves to have truly positive role models, not assclowns on TV and on the covers of the magazines in the magazine rack.

We can do better. 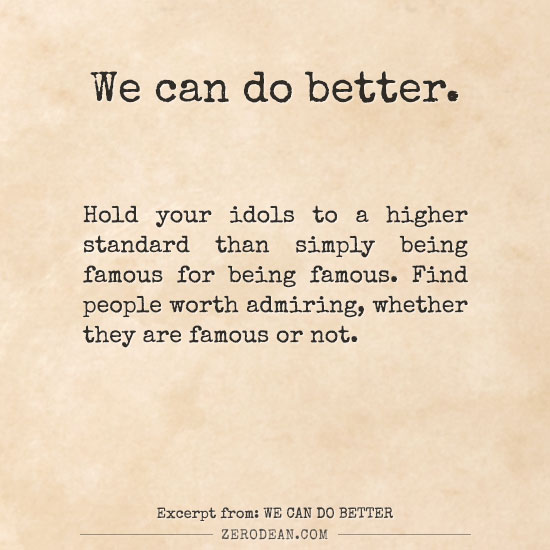 Eric: Now what the hell could you possibly have against sleeveless undergarments?!

Zero: “Girlfriend beaters” just doesn’t have the same ring to it…