Skip to content
There is a big difference between “I can’t” and “It just isn’t a high priority”.

Your mission, if you choose to accept it today, is to get out of your comfort zone at least once.

Take a new route. Favor your other hand. Try to appreciate a song from a genre of music you don’t like. Initiate a conversation with a stranger…

Small or large, whatever it is, just do something differently today and gain a new perspective or insight.

And have an awesome day.

*Disclaimer: You accept full responsibility for the outcome of any missions you choose to accept.

Really? Well I have some questions for you:

Because, while it is true some people are more naturally talented at some things than others, most people who are good enough at something for you to notice how good they are at that thing have put in countless hours practicing that thing.

So is it really any surprise that you’re not as good at something as someone who has trained themselves to do something is?

Be very wary of the limitations you place on yourself. Repeatedly telling yourself that you can’t do something, will eventually make it true, simply because you convince yourself to never try.

And let’s be frank, perhaps with countless hours of training, you still won’t be as good at something as you want to be — we all have our own areas of difficulty (as well as excellence) — but you will certainly be better than you were when you started. And you will likely have learned something valuable in the process.

You rarely get better at anything without experience. And that also means countless failures.

So don’t say you can’t do it if you haven’t made repeated attempts and failed.

Don’t say you can’t do it if you’ve barely ever even tried.

As a wise person once said, success is 99% failure.

You’ll never do great things unless you make the effort and try. 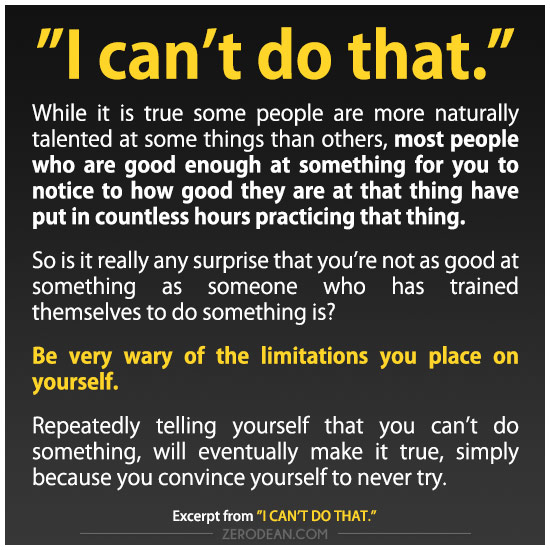